DAMS‘ Dan Ticktum returned to action for Qualifying after missing the Free Practice session when a first COVID test proved inclusive. However, a second test returned negative meaning the Brit was free to qualify for the Feature Race.

Despite being cloudy for most of the day along with a brief rain shower, the sun appeared at the beginning of the qualifying session warming up the ambient and track temperatures as both MP cars led the field out of the pitlane for the 30 Minute qualifying session.

Giuliano Alesi’s diabolical weekend got even worse at the beginning of the qualifying session as his BWT-Racelab car pulled slightly to the left forcing the Frenchman to box the car for repairs.

Jüri Vips’s debut weekend had its first drama with the Estonian’s DAMS car coming to a halt at Les Combes meaning that the Formula 2 rookie will start his maiden race last on the grid.

Next to hit trouble was Guilherme Samaia as the Brazilian’s Mecachrome engine had fire coming out of the end of his engine.

The Brazilian pulled off the track on the run up to Blanchimont as he joined Vips on the sidelines for the rest of the session.

At the time of the red flag Trident’s Marino Sato topped the timesheets with 21 Minutes left with a time of 1:58.959 ahead of Pedro Piquet and Jehan Daruvala with Samaia’s teammate Jack Aitken fourth fastest.

The session briefly restarted only for it to be red-flagged once again. This time for a course vehicle to be at its correct post after it had removed Samaia’s car.

With the course truck still on the runoff area when the session restarted it forced Race Control to step in and stop the session again.

The delay was a short one however and the session recommenced with just under 19 Minutes left of the session.

Mazepin moved himself up to fourth fastest. He was just under four-tenths quicker than Louis Delétraz, who was fifth ahead of Guanyu Zhou in sixth.

Ilott’s rivals in the Championship were struggling for pace on their first laps with Robert Shwartzman only ninth fastest and Christian Lundgaard only 14th place as the Dane abandoned another lap.

Jack Aitken had a tough qualifying session as the Campos looked twitchy around the Spa-Francorchamps circuit with the British-Korean going wide into Pouhon. The Williams junior remained planted in 18th place.

Alesi’s repairs had not turned his fortunes around. The Frenchman struggled with a lack of track time and a car bottoming out as the Frenchman was nearly five seconds slower than provisional pole sitter Tsunoda.

Mazepin’s second run saw him knock Tsunoda off provisional pole with a time of 1:57.721 but Tsunoda quickly bettered that to take his second pole position by over a tenth of a second from Mazepin.

Tsunoda’s countryman Nobuharu Matsushita was surprisingly third fastest ahead of Shwartzman and Felipe Drugovich to round off the top five.

Guanyu Zhou was sixth fastest ahead of Schumacher and Delétraz with Jehan Daruvala and Luca Ghiotto lining up on the fifth row of the grid in tomorrow’s Feature Race.

Piquet had a good qualifying session in 11th ahead of Championship leader Ilott in 12th with Marcus Armstrong and Dan Ticktum 13th and 14th on the grid.

Roy Nissany and Sato made row seven an all Trident affair, whilst Lundgaard’s testing weekend continuing as the Dane could only manage 18th behind Aitken.

The two Ardens were the last two cars to set a time with Artem Markelov out-qualifying Alesi, and Samaia and Vips lining up at the back. 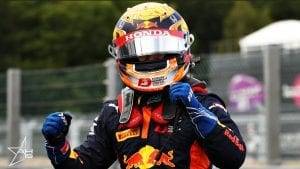