Yuki Tsunoda won a poignant Formula 2 Feature Race in Belgium after Nikita Mazepin was given a late penalty.

The pair were battling for the win in the closing laps when Mazepin forced Tsunoda off the road, triggering the stewards to give the Hitech driver a five-second penalty.

A year on from the tragic passing of Anthoine Hubert, Formula 2 remembered the Frenchman before the race before Tsunoda’s terrific win ahead of Mazepin and Mick Schumacher.

Mazepin got ahead of Tsunoda during the pit-stop phase, although the Russian is under investigation for an unsafe release.

The Carlin driver attacked Mazepin in the closing laps but the Russian held on for his second win of the season.

At the start polesitter Tsunoda held off Mazepin into La Source. Matsushita was patient and bravely went side by side with Mazepin into Eau Rouge, taking second on the Kemmel straight.

Shwartzman was slow off the line, dropping from fourth to sixth on Lap 1. Mick Schumacher benefitted from his teammate’s struggles, taking fourth.

Mazepin stalked Matsushita in the early laps, passing into Les Combes on Lap 3. The Japanese winner from two weeks ago continued to struggle, losing out to several other drivers. Schumacher, Louis Deletraz and Shwartzman passed the MP Motorsport driver in quick succession as his tyres faded.

Matsushita’s race went from bad to worse as he battled with teammate Felipe Drugovich. Heading into Blanchimont, the pair touched and Matsushita spun out, with Drugovich heading to the pits for repairs.

Following the virtual safety car, Zhou was all over the back of Shwartzman and took back the place he previously lost.

The Chinese star was going well on his medium tyres as others struggled with tyre wear. A lap later he lined up Deletraz and easily passed for P4.

READ MORE: Why Anthoine Hubert is so missed by everyone

Mazepin was the first of the frontrunners to pit on Lap 10, followed closely by third placed Schumacher.

Tsunoda and Shwartzman followed in a lap later, allowing Zhou to inherit the race lead. The Carlin’s stop was slow, allowing Mazepin to benefit and take the position.

The first of the alternate runners entered the pits on Lap 14, with Pedro Piquet, Dan Ticktum and Callum Ilott switching to the softs.

Two laps later race leader Zhou came in for his only stop of the race. He came out in seventh but lost out to Luca Ghiotto , Piquet and Ticktum on cold tyres.

Ghiotto was holding this group up on the medium tyre, and behind him Ticktum and Piquet switched places, as did Ilott and Zhou.

Championship leader Ilott had been struggling, but he passed Piquet for 8th, with Zhou following through. Soon after, Zhou overtook his current UNI-Virtuosi teammate before chasing down and passing Ghiotto, his old teammate.

Meanwhile at the front, Tsunoda was attacking Mazepin for the lead. The Japanese driver went for it at Les Combes, but couldn’t make it stick. Mazepin forcefully pushed his rival off the track, unfairly in the eyes of the stewards.

Roy Nissany was having a strong race, passing Ilott for ninth and then diving down the inside of Ghiotto for P8.

Mazepin held on for the win on track ahead of Tsunoda and Schumacher. However, on the warm-down lap Race Control announced a five-second penalty, dropping him down to second.

Deletraz secured a solid fourth, with Shwartzman taking fifth and a good haul of points for his championship effort.

Ticktum held on for sixth ahead of Zhou, with Nissany in eighth, claiming reverse grid pole for Sunday’s Sprint Race.

Ghiotto held ninth ahead of a disappointed Ilott, who still holds the championship lead ahead of Shwartzman. 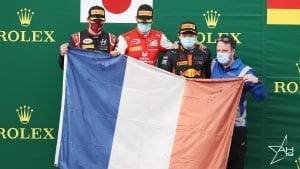