The Carlin driver had a quiet race in third for 19 of the 21 laps, but when Schumacher and Shwartzman collided at Luffield, Tsunoda took the lead and never looked back.

Schumacher managed to hold second, but damage to Shwartzman’s car saw him drop way down the field. Jack Aitken took advantage of the incident to take third, his second podium of the weekend.

Reverse grid polesitter Shwartzman held the lead off the line but was quickly under pressure from Schumacher.

Aitken and Christian Lundgaard both made positive starts, moving up to fourth and fifth respectively.

The PREMA pair were battling hard, with Schumacher right behind his teammate. Shwartzman was leading by just three-tenths of a second before Schumacher lost the rear at Brooklands.

He went off the track but kept it facing the right way, losing a couple of seconds to the leader but nothing more.

With just six of the 21 laps completed, Lundgaard started complaining about tyre wear over the radio.

The Dane’s struggles invited Louis Deletraz to close in and the Swiss driver obliged, passing Lundgaard on the run into Maggots

On Lap 9 the UNI-Virtuosi pair made their moves. Firstly, Callum Ilott messily passed Nikita Mazepin for P8 at Brooklands with the pair making contact.

Just a few corners later, Guanyu Zhou bravely attacked Lundgaard into Maggots, making it stick around the outside in one of the moves of the season.

A few laps later, Lundgaard went off the track at Abbey, handing P7 to the other UNI-Virtuosi of Ilott.

The ART driver was claiming tyre wear and rightly so, as half a lap later, Lundgaard’s tyre finally went, costing him any chance of points.

Up at the front, Shwartzman began reporting tyre difficulties over the radio, with Schumacher closing in again. The PREMA pair now had Tsunoda for company, and the Japanese driver was sniffing a first F2 win.

With two laps to go Schumacher attacked Shwartzman down the Wellington straight but the pair collided on entry into Brooklands. Schumacher cut across Shwartzman, damaging both cars and allowing Tsunoda to take the lead.

Shwartzman’s damaged front wing cost him vital time, dropping like a stone out of the points.

Tsunoda then had an easy run to the line, with Schumacher also losing time. Luckily for the German, he was comfortably ahead of Aitken in third.

Dan Ticktum recovered after Saturday’s nightmare to pick up two of points for P7, with Mazepin cruising home in eighth. 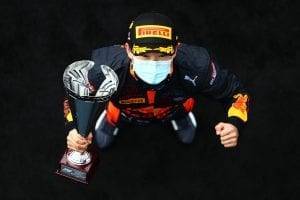