Yuki Tsunoda took a superb win in a frenetic Feature Race while Mick Schumacher took control of the title battle as PREMA secured the constructors’ title.

Tsunoda endured a race long battle with Nikita Mazepin and Felipe Drugovich before holding off a late charge from Guanyu Zhou. The Chinese driver came home second, with Mazepin third, although Tsunoda and Mazepin are under investigation.

Schumacher had a strong race, working his way up to seventh at the flag, with two bonus points for fastest lap meaning the gap to Callum Ilott remained the same, with the Brit only able to make it to P6.

At lights out, Tsunoda got away brilliantly but lost out into Turn 1 as Mazepin swooped in to snatch the lead.

Schumacher made a good start, moving up to P13 by the third lap.

Ilott began to struggle early on, and was passed by teammate Zhou and Dan Ticktum before the pit-stop phase.

With Ilott struggling UNI-Virtuosi decided to bring in the Brit for his mandatory pitstop, with Ilott far happier on the harder compound.

Schumacher was one of the last to pit, putting on the soft tyres and returning to the track in 13th. Quickly he started to move through the field towards the points.

Zhou had a setback when he received a five-second time penalty for speeding in the pitlane, but he continued his charge up the order

Schumacher moved into the points and then passed Ticktum into ninth courtesy of a daring manoeuvre into turn seven.

Shwartzman began to struggle, losing out to Tsunoda and Drugovich, dropping out of the podium positions.

While the front few were battling, Zhou arrived on the scene with better pace and stole second place. Mazepin was having a tough time on his tyres and battled Drugovich for third.

The Brazilian driver was looking every way to take the position, but Mazepin’s robust defending prevented him from getting past. The battle allowed Zhou to extend a five-second gap to the pair, allowing the UNI-Virtuosi star to keep second place.

Drugovich had to settle for fourth on the road, ahead of Shwartzman and championship contenders Ilott and Schumacher. Jehan Daruvala will be on pole for tomorrow after finishing eighth, ahead of Ticktum and Pedro Piquet. 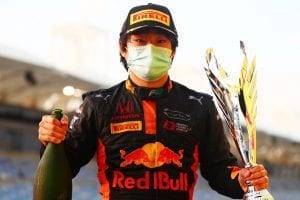