Liam Lawson and David Beckmann face an uncertain few weeks regarding their chances of Formula 2 seats for 2021.

Both drivers will be hoping to capitalise on their strong second seasons in Formula 3, where they finished fifth and sixth in the drivers’ standings respectively. They’ll be looking to earn promotions to the second-tier of single-seater racing, with their dreams of places on the Formula 1 grid firmly in sight.

Lawson has been a member of the Red Bull Junior Team since 2019, alongside current Formula 2 drivers Yuki Tsunoda, Jehan Daruvala and Jüri Vips, who has replaced the injured Sean Gelael at DAMS for the rounds at Spa, Monza and Mugello.

The Hitech driver knows that his plans for 2021 will be decided within the Red Bull programme and as a result, faces an unsettled few weeks as rumours abound that Tsunoda could replace Daniil Kvyat at AlphaTauri next year should he earn the required superlicence points.

Speaking about the possibility of an F2 seat after his dominant win at the season finale in Mugello, he said: “It’s not really up to me actually, so we have to wait and see.

“It’s up to Red Bull and up to the people around me to decide what they think is best for me. I hope to find out soon, and we’ll see what happens.”

Over the past few years, Red Bull have tried to utilise other major championships for the drivers in their programmes. Previously, AlphaTauri driver Pierre Gasly and current DAMS driver Dan Ticktum have been a part of the Super Formula series  in Japan and Vips was scheduled to race there this year.

As a result, there is a real possibility that Lawson could be placed in a different championship next year to avoid a saturation of Red Bull junior on the F2 grid, which we have seen happen with the five Ferrari Academy drivers this year. However, should Tsunoda be promoted to F1, a path to F2 for the Kiwi driver may be found via his seat at Carlin.

Alongside Lawson, Beckmann also heads into the off-season without confirmed plans for 2021.

Regarding his chances of an F2 seat next year, the Trident driver said: “Obviously, I want to rise up to F2, but I need to see if I can get the budget for that.

“Anyway, we’ve had a season end in September, so now we can think for a while about it. That’s how it goes.

“Let’s see what I’ll do next year, but I think I have a good chance of finding good teams in higher championships.”

The German driver faces the dilemma many young drivers have faced throughout their careers, especially those who are not attached to an F1 academy or have extensive funds for their careers. Ultimately, a lack of budget not a lack of ability can hold promising talents back from progressing up the junior series ladder.

Beckmann was the most consistent driver on the F3 grid this year and only failed to score on one occasion, due to a retirement that was not his fault. Hopefully, that level of consistency and growth will attract much-needed backers to the 20 year old driver and see him join the F2 grid next year.

With rookie talents as strong as they are in Formula 2 this year, seats for 2021 are going to be hot property and Lawson and Beckmann will be anticipating that they don’t lose out as a result. 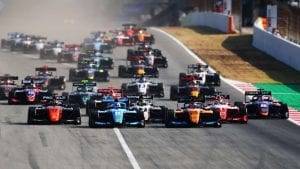