UNI-Virtuosi showed their strength in Formula 2 by finishing second in the teams’ standings for the second year in a row.

With one of the strongest line-ups in Callum Ilott and Guanyu Zhou, the British based team were set for another competitive season and they did not disappoint.

Across the season, they clocked up four wins, 12 podiums and six pole positions and challenged Prema for the teams’ title all the way to the final round.

For me, Callum Ilott has been the standout driver of the season. Heading into 2020, many presumed he would be outclassed by Zhou and was very overshadowed by his fellow Ferrari Academy drivers.

However, the British driver was undeniably one of the quickest drivers on track, after taking five pole positions and qualifying in the top 5 in all but two rounds.

2020 could not have gotten off to a better start, after steering clear of trouble to take his maiden F2 victory in the first Feature Race at the Red Bull Ring.

The Sprint Race in Hungary saw him clock consecutive fastest laps to narrowly miss out on victory by a car length.

Yet the Silverstone double header epitomised the chaotic 2020 season for the Brit. The first Feature Race started off disastrously after being forced to start from the pit lane and charge through the field to fifth.

In the Sprint Race he was unfortunate after a collision with Yuki Tsunoda saw him receive a five second penalty. Then whilst trying to catch the DAMS of Dan Ticktum, he spun and retired after stalling.

Nevertheless, he bounced back with an ideal getaway in the following Feature Race to assume the championship lead with his second victory this season.

A chaotic climax to the Feature Race in Spain saw him miss out on another victory, after a last lap dash dropped him to fifth.

Belgium’s emotional return had Ilott get tagged by Tsunoda in the Sprint Race and forced to retire.

A successful weekend in Monza enabled him to take charge of the championship once more.

Initially, a disastrous pit stop saw him stall on release in the Feature Race. He then produced one of the quickest drives of his career, setting purple sector after purple sector on his way to sixth.

His third and final victory of the season came as a result of a post-race penalty for Dan Tickum in the Sprint Race.

However, despite his best endeavours Ilott was not able to stop Schumacher’s title charge from Mugello onwards.

He failed to score after front wing damage in the Mugello Feature Race, which was followed by a photo finish ending to third in the Feature Race in Sochi.

Heading into the Bahrain double header, it was clear that Ilott and Schumacher were the two  main title contenders, with Ilott taking his sixth podium of the season with second in the Feature Race.

Yet his title hopes were knocked after his attempts to overtake Schumacher resulted in a collision with Jehan Daruvala that dropped him out of the points.

Nevertheless, it was the thrilling season finale that kept us on the edge of our seats where Ilott tried to capitalise on Schumacher’s struggles.

However, tyre degradation meant he ultimately faded away and finished in eleventh, to end the season second in the drivers’ standings, 14 points behind Schumacher.

Sadly, despite his strong F2 campaign, we won’t see Callum Ilott on the F1 grid next year. The British driver has been announced as a Ferrari test driver for 2021 and hopefully, we will get to see our 2020 Vice-Champion in Formula 1 soon, as his racecraft this season merits it.

The Anthoine Hubert Rookie of the Year Award winner in 2019, Guanyu Zhou was looking to impress.

However, 2020 was an unfulfilled season for the Chinese driver, one that showed so much promise but did not finish how many expected.

The opening weekend in Austria got off to a blinding start, taking pole position and leading the Feature Race after overtaking his team mate. However, mechanical issues dashed his hopes of taking his maiden win in Formula 2.

Not one to be deterred, he bounced back with Zhou managing to take third in the second Austrian Feature Race, followed by fourth, tenth and eighth place finishes through the subsequent round in Hungary.

The back-to-back rounds in Britain were a mixed weekend with a last dash sprint on the alternative strategy seeing him nab second in the Feature Race.

Zhou then was able to capitalise on a chaotic end to the Feature Race in Spain to take his third podium of the season, followed by a fourth podium with third in the Sprint Race in Spa-Francorchamps.

Nevertheless, Zhou’s season has been marked by his fluctuating performance and luck, after retirements in Monza and Mugello.

His first victory finally came in less than ideal circumstances during the Sprint Race in Sochi. An early collision between Jack Aitken’s Campos and Ghiotto’s Hitech ended the race prematurely, with only half points awarded.

Zhou headed into the penultimate weekend in Bahrain as an outside championship contender in eighth.

However, after being tagged by Schumacher whilst fighting for fourth, he was forced to pit with damage and fell out of championship contention..

He returned to form in the final weekend in Sakhir with a stellar charge through the field from 11th saw him achieve second in the Feature Race and fourth in the Sprint Race.

Overall, 2020 has been an underwhelming season for the Renault Academy driver, who many were backing to take home the Formula 2 title.

In a season full of ups and downs, UNI-Virtuosi will be able to look back on another positive season. With Felipe Drugovich announced for  2021, I’d be putting them as one of the firm Formula 2 title favourites next year. 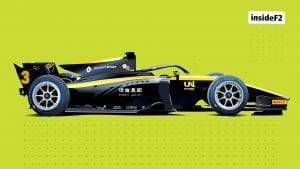