UNI-Virtuosi and Zhou Quickest Out of the Blocks in Bahrain

UNI-Virtuosi and Zhou Quickest Out of the Blocks in Bahrain

A strong start for UNI-Virtuosi

The Chinese driver was delighted with his performance, beginning the 2021 F2 season in the best possible way.

“Pole position! Really satisfied with all the work the team has been doing.”

“We’ve come back really strong after a little bit of struggling in practice, and it was a pretty good session with a different strategy, a lot of pressure on my side to really do a good lap in each tyre, but we got the job done.”

Zhou shot to the top of the timing sheets midway through the session, choosing to run in the gap between most other drivers’ qualifying runs. This meant he was able to avoid traffic on his timed lap.

ART Grand Prix driver Christian Lundgaard then took provisional pole by several tenths before Zhou snatched the top spot by just 0.003 seconds in a frantic conclusion to the session.

Felipe Drugovich built on a strong practice session to impress in his first qualifying session for UNI-Virtuosi.

The Brazilian is clearly settling in well after moving from MP Motorsport for the 2021 season.

“Very good result for me, P3. Coming up from Free Practice, I was P1 there and P3 in Qualifying so I have to be happy with the day.”

The drivers look ahead to the new weekend format

Zhou and Drugovich will start the first of Saturday’s two Sprint Races in 10th and 8th position respectively under Formula 2’s new weekend format, and will line up in first and third respectively in Sunday’s Feature Race.

Zhou, along with the rest of the F2 paddock, now casts his focus on how the weekend will play out.

“We have a long weekend ahead with three races so it will be interesting and hopefully I can do the best I can.”

Felipe Drugovich has set his sights on climbing up the order in Saturday’s Sprint Race 1.

“Hopefully we can get some good overtakes tomorrow and recover a lot of places.”

F2 fans will be united with Drugovich as they look forward to an action-packed weekend.

Both UNI-Virtuosi drivers will look to capitalise on their strong qualifying pace to gain positions in the Sprint Races.

Meanwhile, their rivals will try to take advantage of their reverse-grid positions and defend from the fast-charging drivers behind.

The Norfolk-based outfit will be in the box seat for Sunday’s Feature Race, and will want a clean getaway to maximise their points haul for the weekend and end the first round of the 2021 season out in front. 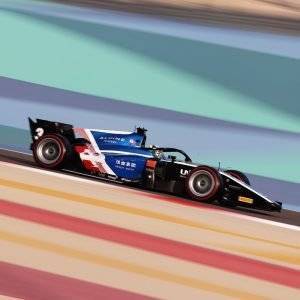