UNI-Virtuosi had a good race with both their drivers finishing in the top five in the final Feature Race of the season.

Guanyu Zhou stormed through the field from 11th to second in the final Formula 2 Feature Race of the year as Callum Ilott kept himself in championship contention taking it down to the last race of the season.

A red flag and traffic issues in qualifying on the outer layout track left Zhou starting 11th and Ilott ninth.

Zhou decided to start the race on the harder compound of the two tyres available to the teams this weekend. The harder compound has less grip but more durable, but most teams opted to go with softs before making the switch.

Despite the grip disadvantage, Zhou made a storming start to run seventh for most of the first stint until the people around him started pitting.

The Chinese driver made the switch to the soft tyre after just over half distance, so he had to make the tyre last as well as pushing hard to move forward. He managed it perfectly and made his way towards the cars ahead, erasing a deficit of over 11 seconds.

Zhou made a handful of opportunistic overtakes to finish just behind the race winner who was on the opposite strategy. It gives him the chance to fight for sixth in the championship.

The Renault Junior driver said: “At the beginning of the race I had to work hard with the hard tyres. I remember thinking at the time ‘I have to go longer with my tyres’. It was really tough having to manage that, and I think I did pretty well.

“After the pitstop it was about trying, with the tyre advantage, to get ahead. I knew I was in a good position, at least for the reverse grid. I just kept pushing.

“After a tough season definitely, all these moves on the last few laps have to really stick and be straight forward, but I couldn’t afford to lose any time. Especially when I got to P4. I had to do two moves and got clear, and then it was about catching Yuki in the DRS train.

“Not really necessarily to attack him, just more like trying to follow him and go through. I don’t know how many seconds there were before the last lap, but I was always pushing—all the way to the finish line.

“I was just grateful I got the P2 in the end. It’s really great for the team with how hard they’ve worked so far.”

Whereas, Ilott started on the soft tyre, but he still had to fight back by overtaking several cars towards the end of the race to finish in an impressive sixth place, reducing the deficit to the points’ leader to 14 with 17 points left.

The Brit said: “Not a bad race, some good points.

“I had a good start although on the second lap I used a bit more of the tyre than I would have liked.

“From there, the pitstop was great, I came out, had a good stint on the prime, just not quite good enough to really make up anything from there. Overall, good clean race.

“Tomorrow, I just have to try and win, do the best job possible and then from there, just see what happens…”

Ilott will start the Sprint Race from fourth while Zhou will start seventh due to the reverse grid format.

UNI-Virtuosi is now guaranteed second place in the teams’ championship after the Feature Race. 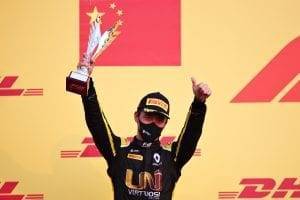