UNI-Virtuosi claimed vital points in the Formula 2 Sprint Race in Hungary as they claim a podium with one driver and a superb comeback for their other driver.

Callum Ilott scored a strong second place, even making it as much as four seconds a lap quicker than the eventual winner by the end of the Hungaroring sprint race. Meanwhile, Guanyu Zhou delivered a phenomenal drive to recover points and take the fastest lap.

The Ferrari backed driver scored pole position for Saturday’s Feature Race, but the wrong strategy forced him to fall to eighth in the closing stages. However, this did guarantee pole position for the reverse-grid sprint race.

Ilott went into an early lead of over three seconds in the second race for Formula 2, and with high tyre wear the team decided to pit. The eventual winner stayed out, with Ilott hunting him down, however, he was unable to get close enough to make a move despite closing down a 30 second gap.

The result means that, leaving Hungary, the young Brit is second in the championship, only 18 points adrift of the lead. He has not finished outside of the top ten and even won the first race of the season.

Ilott said: “It was a great second race. It was a great start, a great first lap. I just cleared away and had a good gap. I was managing the tyres. This year the tyres are kind of up and down. They were fine and then just dropped off. At that point, I think within two laps, we calculated it and made the decision to pit. Honestly, the option tyres held performance longer than I thought. It was getting close at the end. I was loving it, but also it was frustrating to have it so close to that point. We didn’t plan to box at all. I still think he still would have been ahead because of our pit stop. But what a race it was. It was good fun.”

Zhou was on the same strategy as his teammate in the first race having started third, and finished tenth, missing out on the chance of a reversed-grid spot.

After struggling to get away at the start, the Chinese driver rebounded using the same strategy as Ilott to recover to eighth, claiming the final point in the race.

Zhou said: “Qualifying was good in the rain, we had really good pace. I think we did a good strategy for the race. The race one start was bad, and we weren’t expecting to have that much degradation with these tyres. I think in general we’ve gone from no degradation in Austria to more degradation than last year here. It’s frustrating to finish P8 and P10. Sunday’s race was compromised by Saturday, but we made good set-up changes so we got the fastest lap and we have something to build on to come back strong and fight for decent points in the next few rounds.”

The team head to Silverstone next for its home event, where Zhou holds the lap record after his pole position time there last year. Formula 2 will face a double header at the British circuit, meaning four races in all. 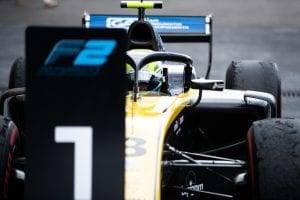