Callum Ilott scored a second win of the season from pole in the Feature Race at Silverstone to take the lead of the championship and extend UNI-Virtuosi’s gap at the top of the teams’ championship.

After taking pole, the Brit got a strong start and stayed in the lead, building a gap. Ilott showed that tyre management was just as important as raw pace as he dominated the race.

Ilott stayed out one lap longer than most of the other drivers on the same strategy and started making his way through the field of cars that hadn’t stopped. Once everyone had pitted, Ilott had a huge lead. With the tyre management skills of the Ferrari Academy Driver, the others fell away and he finished 8.5 seconds clear of everyone else.

Callum Ilott said: “What a race! I got everything right today, unlike last weekend. I’m really happy all the work the team and I have done to continue our progression, and today’s result is proof of that work.

“I got the start right. Dan [Ticktum] got a very good start too and came up behind me. I felt like I’d done a good enough start, but clearly, he got a mega launch.

“The first stint was good. I had to extend it another lap. That was always the plan because of where we are in the pit lane. We’re the first ones, so if everyone comes in on lap six I’ll never get out because all the train would come through.

“I had a clear run out of the pits. I think I pulled a little bit of extra time on Christian [Lundgaard], and then tried to put a decent lap in to increase the gap and then maintained it from there. Not a bad effort, I think.”

The result moves Ilott to the top of the championship, 15 points clear while UNI-Virtuosi extended their lead which was helped by Guanyu Zhou finishing in the points in ninth.

A tricky start cost Zhou as he had to manage his tyres and attack on the opposite strategy to Ilott.

Silverstone can be difficult to pass at when following in traffic and the Renault Formula 1 test and development driver was stuck behind two cars and had to settle for ninth place, just missing out on reverse grid pole.

Guanyu Zhou said: “We didn’t have the best start today and unfortunately that limited what we could do in the race.

“We have a bit of work to do on the car to score a better result tomorrow, but I’m confident in the team that we can work to improve.

“We’ve shown good pace at Silverstone before and the field is tight, so any improvements give us a much better chance.”

Ilott will start the Sprint Race from eighth with teammate Zhou one place behind in the same place he finished. 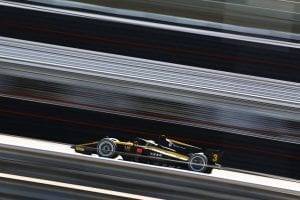