UNI-Virtuosi Up for the Title

UNI-Virtuosi Up for the Title

UNI-Virtuosi drivers, Guanyu Zhou and Felipe Drugovich, have set out their stall following a convincing 1-2 in the FIA Formula 2 Monaco Sprint Race.

Zhou led comfortably from the start to win in the Principality, ahead of team mate Drugovich.

The Brazilian lost out on the race start to Christian Lundgaard, but gained his place back after the Dane’s engine failed on Lap 15.

When asked post-race if the the drivers have the car underneath them this season to challenge for the title, Zhou said:

“Yeah definitely. We finished P2 in the Constructors Championship last year, so we definitely have a strong car and strong team.

“We’re working very hard to the limit and finding something new and something better. We have a good car, so I’m happier and more excited for the following races.”

Thursday’s Qualifying session didn’t reflect the results of today’s dominance. Both drivers could only manage P9 and P10, but all was not lost from this, on a track that’s notoriously difficult to overtake.

“Yesterday both cars didn’t have greatest pace in qualifying. The reverse grid today helped for sure.

“We seem to be pretty strong in the races, but in Monaco if you don’t have the pace you have the guy in P2 right behind you  – but we seemed to be quite comfortable for myself in front.”

“Taking victory in Monaco, there’s nothing more special and more happy than this.”

Drugovich picked up on Zhou’s words about qualifying, and responded with humour:

Expanding on how good the UNI-V car is currently performing, he explained:

“The car has been really good all season. Only one qualifying we didn’t go pole position in Bahrain. I think we’re really strong, and we’re really fast. I’m happy with that.”

Drugovich indicated how hard the team works throughout the season.

“We’re working to keep improving in the season. What many people don’t see is the level of the team – they grow and grow and improve during the season quite a lot and that’s what we’re trying to achieve… Just keep improving every race and limiting mistakes.” 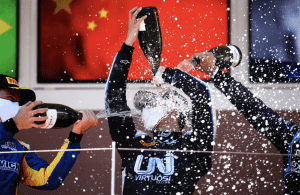