Van Amersfoort No Longer Fools of the Grid

Van Amersfoort No Longer Fools of the Grid

Sitting in 10th place in the FIA Formula 2 Teams’ Championship with 73 points, the Van Amersfoort team are not the ‘fools of the grid’ they could have been had their season not improved the way it did.

Frits Van Amersfoort spoke exclusively and in-depth to insideF2 at Yas Island, summarising the team’s inaugural season in F2, and their end-of-season test week; Plus giving a brief insight into the business side of F2 teams.

“We didn’t expect anything, but we had hopes. But these hopes went down the drain pretty quickly at the beginning of the season. We take the day as it is and we want to be the best on the day we are living in. We know it was hard work and we kept on working, and then you see in the end it falls together.

“I see the atmosphere in the team and everybody is really happy to know that we can do a good job and we’re not the fools of the grid anymore – which we were in the beginning honestly.

“For next year it’s the same, we are not the last in the row anymore. So, we start positive. We know there’s still a lot to do and we start trying to be a few places up the line for next year.”

“I’ll be happy when I’m home tomorrow. It was hard, and a hard two weeks because of the temperatures [in Abu Dhabi] but in the end I think these two weeks were great for us.

“The good thing is that we now start on a very positive way for the winter. And we know this winter is not going to last long because end of January it already leaves for Bahrain.”

When the three-day post-season test began, fresh faces jumped into the cockpits of the distinctive black and orange VAR cars. One in the form of Trident’s 2022 driver, Richard Verschoor. It’s unconfirmed whether the Dutchman will be driving for his home team next season. Though most times, the end-of-season test is an indication of where we could see them the following year.

“Richard did an amazing job. He gave us the boost on the first day, let’s see how the future is. I can’t say anymore about it at the moment, but we have good hopes let’s put it this way.”

The final two races of the season saw the much anticipated return of Juan Manuel Correa in the VAR car. The Ecuadorian also participated in the post-season test for the team.

“Juan did the race weekend and also the two test days. Over the next few weeks we will see, and you will see, what is going to happen. At the moment it’s all open still. More or less open. In Holland we say, ‘I don’t want to show you the end of my tongue’. We are speaking, and we hope in relatively short periods of time things will be known and done; Then it can really be winter time.

VAR have competed in other motorsport series’ since 1975. They have a long history, and a plethora of well known names, including Max Verstappen who has gone onto achieve the highest accolades. VAR may have arrived late to the Formula 2 party, with 2022 being their inaugural season, but it looks like they’re here for the duration.

“The other teams that are here, they have other junior teams, and racing starts to be a big business; Not big in terms of money, but most of them here they have other teams. And that’s the reality nowadays. As a company owner you have to make sure it keeps rolling.

“On one hand it’s difficult, because there’s so many people employed, but it’s the only way to stay alive in this racing world. 20 years ago I ran two F3 cars, that’s it, but you can’t live from that. it’s impossible these days. So that’s what we see here, all big teams, professional teams, and that’s how the future will be.

“We entered this professional level last year, and we’re happy to not finish last. For next year we all hope to climb a little bit further up the ladder.” 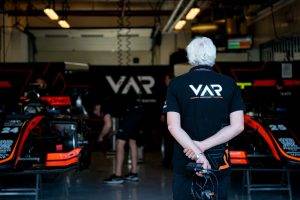