Verschoor Optimistic about Points at Silverstone

Verschoor Optimistic about Points at Silverstone

Achieving his best Qualifying result of his FIA Formula 2 campaign so far, Richard Verschoor is eager to return to the points this weekend.

Baku proved to be a battlefield for him after DAMS’ Roy Nissany collided with the back of his MP Motorsport car in Sprint Race 2 and he made contact with compatriot Bent Viscaal during the Feature Race.

As a consequence, the rookie driver, who currently sits 12th in the drivers’ championship on 23 points, is hoping to end his three-race run of non-points scoring finishes.

“I’m really pleased with today in general, especially coming from Monaco and Baku which were quite difficult weekends for us.

“I’m happy to be at front again, which is how we more or less started in Bahrain. It feels a bit better to be honest and I hope we can continue like that for the races tomorrow and Sunday.”

Qualifying third on the grid for the Feature Race sees the Dutchman line up in eighth for the opening Sprint Race and he is optimistic about his chances of success at Silverstone.

“We are starting P8 tomorrow so it will be exciting, hopefully we can stay inside the top ten and get a good result in Race 2 and Race 3.

“Now we are back at a normal track and this year we are back up there again, so that gives us confidence. I just look forward to the race.”

Unlike many of his rivals on the grid, Verschoor adopted the alternative strategy in Qualifying waiting until the track was quiet before putting in his first representative lap.

Similarly to UNI-Virtuosi’s Guanyu Zhou, he was a beneficiary of the late red flag. With only one push lap per set, he managed to snatch third moments before the session was brought to a halt.

The opening race of the weekend may prove to be a learning curve for Verschoor. The long gap between the Formula 2 rounds this year has proved a new layer of difficulty for the drivers compared to the virtually back-to-back F2 and F3 campaigns last year.

“I think the main thing is we didn’t drive, or most of us didn’t drive for six weeks and then to step into a Formula 2 car, which is obviously not nothing, it’s quite challenging but on the other hand, it’s nice.”

Verschoor needs to shake off any rustiness quickly and keep out of trouble if he wants to put himself in the fight for a strong haul of points at Round 4.

Will Verschoor finish inside the points at Silverstone? 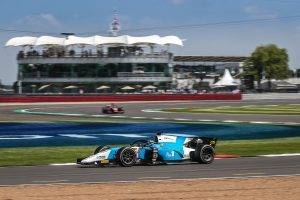