Richard Verschoor ended day two of Formula 2’s In-Season Test in Barcelona at the top of the timing sheets for MP Motorsport.

The morning session began with MP Motorsport as the first team on track, as Verschoor laid down the benchmark with a 1:29.846s, clocking it in within the opening 10 minutes.

ART’s Christian Lundgaard, who was fastest on day one, then pushed the Dutch driver off the top of the timing sheets, before Hitech’s Juri Vips went quickest with a 1:29.560.

A succession of fast laps came in later on, as Carlin’s Dan Ticktum brought out the first of the day’s red flags.

However, the Aussie driver was not to last at the top of the timing sheets, with MP Motorsport’s Richard Verschoor going fastest with a 1:28.280 on an empty track.

Verschoor’s time was not to beaten during the session, as the final 90 minutes proved to relatively quiet.

Ralph Boschung proving to be the Dutchman’s nearest competition. The Campos driver was nearly two-tenths slower than Verschoor.

UNI-Virtuosi’s Felipe Drugovich was third after putting in a lap 0.264 seconds slower than the leading time, whilst Ferrari Driver Academy’s Marcus Armstrong was fourth for DAMS.

It was positive session for rookie Bent Viscaal, who was fifth for Trident, ahead of the second DAMS of Roy Nissany.

The ART duo of Theo Pourchaire and Christian Lundgaard closed the morning session off in seventh and ninth respectively, split by MP Motorsport’s Lirim Zendeli.

Rookie Liam Lawson rounded out the top 10 for Hitech, as 18 of the 22 drivers ended the session within a second of Verschoor’s quickest time.

With the focus once more on long-runs, Drugovich initially set his fastest lap within the first 10 minutes of the session.

Campos’ Gianluca Petecof then popped himself up to the top of the timing sheets with a 1:30.684. This was ahead of his fellow Brazilian driver  and Matteo Nannini, who has a busy schedule on his hands.

The Italian driver is competing in both Formula 2 and Formula 3 this year for HWA Racelab.

A lengthy red-flag period followed later in the session, as the second HWA of Alessio Deledda lost his car on a out lap.

With 44 minutes to go, the session was red-flagged once more as PREMA’s Robert Shwartzman ground to a halt in Sector 1.

Deledda later brought out the red-flag once again with two minutes remaining.

As a result, testing could not get back underway and David Beckmann ended the afternoon fastest with a 1:29.384. This was a 1-2 finish for Charouz, with teammate Guilherme Samaia narrowly behind.

Verschoor closed the session in third, ahead of Petecof and Drugovich.

Zendeli finished with the sixth fastest time, in front of Nannini and Lundgaard.

Boschung and Shwartzman rounded out the top 10, nearly 5 seconds slower than the leading time.

Teams and drivers will be back on track for the final day of testing tomorrow morning at 9 am (local time).

Who will close Day 3 of Testing in Barcelona fastest? 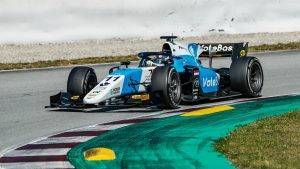