Trident Motorsport’s Richard Verschoor finished Saturday’s FIA Formula 2 Sprint Race at Silverstone in tenth position after the tricky conditions turned this race into a rather strange one.

In an interview with InsideF2 journalist L.A. Wilshaw about his race, Verschoor summed up his race simply by saying: “It was a bit of an eventful one.”

Although Verschoor had a promising start to his race, the Trident driver was not entirely satisfied with the rolling start nor with the struggles that appeared after the lights went out. Yet, Verschoor did admit he could have done worse.

“I wish we could have started like normal, not behind the safety car,” explained the Dutch driver before continuing, “because that would have given me a lot more opportunities.

“The beginning was very good, and I overtook one or two guys. But then we struggled a lot.

“In the end, I finished tenth so I made up five places, which is not too bad.”

Verschoor did admit that the rainy track conditions turned this Sprint Race into a challenging one.

“The conditions were not ideal. The track was getting drier during the race, but I thought it would dry faster, so we could have gone on slicks.

“But, obviously, it stayed quite wet throughout the race, so we tried to pick up as much water as we could to cool down the tyres.

“I think it was a bit weird for everybody with the tyres because we were sliding a lot during the race.

“Some points during the race I was really fast and then I was very slow, which was a bit strange.”

When asked about the Feature Race on Sunday, Verschoor said it would be a tough race for his Trident team. Yet, the 21-year-old driver thinks some better pace will help on Sunday.

“I think it will be difficult for us. I hope we have more pace than what we had in Qualifying.”

“We will try something different, also, strategy-wise, I think we have to go opposite of what most people are doing. We’ll do our best, and hopefully, we’ll have a good pace and a good race.”

Finally, when discussing the previous rounds of this season, Verschoor doesn’t deny that Trident has experienced some ups and downs. Yet, Verschoor admitted to being excited for what’s to come.

“We started off really good, but then we had three very bad rounds.

“[In] Baku we had good pace again, and obviously here we are struggling a bit more. But I’m looking forward to the rest of the season.” 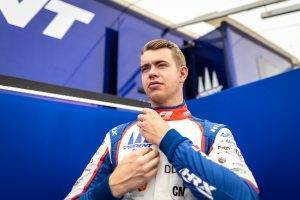