Recently it was confirmed that Richard Verschoor would drive for Trident in the 2022 FIA Formula 2 season. Verschoor drove for his new team for the first of two tests in Bahrain this week.

Unfortunately for both him and Trident, they struggled with some technical issues during the second day of testing. However, both parties seem positive about their potential opportunities this season, and just like F2 fans, happy to be back on the track!

‘Was great to drive in the night again, Shame we had quite a big issue which we are trying to solve overnight. I’m sure the boys will do their best to get ready for some clean runs tomorrow #F2Testing’ – Verschoor, via Twitter.

Following a standout rookie season, Verschoor will continue his F2 campaign with Trident, alongside Calan Williams. Last year, he competed in seven out of eight rounds last year and picked up a win with MP Motorsport in Silverstone.

Verschoor has been very open about the importance of financial backing in motorsport and missed out on the Saudi Arabia round in 2021, before finishing the season with Charouz in replacement of the injured Enzo Fittipaldi.

Speaking about his future with Trident, Verschoor wrote on Twitter:

‘Very excited to join @trident_team for the 2022 @Formula2 season. Extremely grateful to my loyal and new partners for this season’

Verschoor has proved himself to be a credible driver during his time in Formula 3, which, during his two seasons, he won the famous Macau Grand Prix in 2019, where he overtook his fellow potential rival this season, Jüri Vips who is also competing in F2 this year.

“I think Verschoor and Williams will be an extremely solid and promising combination, and they will keep pushing each other to the next level, laying the conditions for a successful season. We cannot wait to be back on track for the 2022 season with our new line-up.”  – Trident Team Manager Giacomo Ricci.

Hopefully, for Richard, he can continue to show his worth in the championship, and who knows, we could be witnessing the career of the next Dutch World Champion in F1! 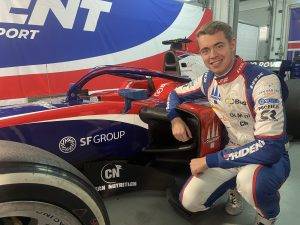