Verschoor Wins at Silverstone after a Dominating Performance

Verschoor Wins at Silverstone after a Dominating Performance

In second place, Marcus Armstrong holding off a quick Dan Ticktum, who rounded up the podium as well. Behind them, Saturday morning’s winner and championship contender Robert Shwartzman lost positions after a spin in the closing stages.

Trouble for Christian Lundgaard started before lights out as he stalled on the grid. He eventually managed to join the back of the field. Things were looking up for the Danish driver in the first Sprint Race as he secured his first podium since Bahrain.

The exciting battle between Liam Lawson and Oscar Piastri for fourth continued behind the pole-sitter Verschoor. The Dutchman got away well ahead of Armstrong.

Ralph Boschung caught a wheel on the grass at the exit of Turn 5 after possibly being forced out wide by Matteo Nannini, which sent him into a spin and unfortunately into the HWA of Alessio Deledda. Both drivers were okay and the other racers behind managed to avoid the incident. Championship contender Guanyu Zhou was one driver who successfully missed Boschung’s Campos.

Bent Viscaal and Jehan Daruvala came together on Lap 7, bringing out the safety car. The Indian driver lost the rear of his Carlin at Stowe while the Dutchman was attempting a brave move around the outside. Daruvala was able to continue and pull into the pits but was awarded a 10 seconds time penalty for causing a collision.

Nannini was lucky to avoid a spinning Jack Aitken in sector three. There was no contact between them but the two had been duelling for position.

Lawson and Piastri continued to swap positions towards the closing stages of the race. The pair went wheel to wheel through Luffield before the thrilling battle was settled at Brooklands as Piastri went down the inside!

The other Hitech, Jüri Vips, ran wide but was able to hang on and defend from Felipe Drugovich to keep sixth place.

Sprint Race 1 winner and runner-up in the championship, Shwartzman spun and lost multiple places on the last lap at the Vale Chicane. He dropped down 15th from ninth and out of the points.

Another crazy race at Silverstone saw Piastri further extend his championship lead after his closest rivals failed to score.

The Australian driver will also be start from the pole for tomorrow’s Feature Race.

Tweet us and let us know your thoughts from today and your predictions for tomorrow! 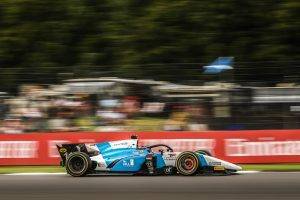