Frederik Vesti is “really happy” with his first podium in the FIA Formula 2 Championship after making it to the rostrum in the Spanish Feature Race to kickstart his season.

After a difficult start to his 2022 campaign, the rookie driver achieved his best-ever Qualifying performance to line up in P3, where he would eventually finish the Feature Race.

“I’m just really happy to be on the podium in F2. I’ve worked incredibly hard, it’s been very tough so far this year, so to be here it really feels like I can start my season now and move forward from here.”

The young Dane was not competitive in the season’s opening rounds and did not feature in the top 10 until Imola in Round 3, where he finally scored points in the Feature Race.

After making another step up in performance in Barcelona, Vesti is looking forward to the rest of the season:

“We started to improve in Imola and then we made this really big jump here in Barcelona. I just think it shows the potential that ART and myself have. We just need to keep our heads down and understand even more what we can do better.”

For a large portion of the Feature Race, it seemed that the Mercedes junior driver would be standing on the second step of the podium. After a good launch, Vesti passed Jüri Vips at the start and held that position until his pit stop.

Behind him, however, eventual race winner Felipe Drugovich had extended his opening stint on the soft tyres and overtook Vesti on much fresher rubber. Looking back on the strategy, Frederik was hopeful of making better calls in future:

“Going longer on the softs seems like the right choice now, but in the car it’s very difficult to know exactly how the race is going to play out. I decided to trust the team and go for a more safe option, but it’s definitely something we need to look at and improve for next time.”

The young driver will now head to Monaco, hopeful of repeating the form he showed this weekend, in order to close the gap to the drivers above him in the championship. 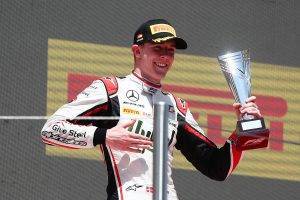