Danish driver Frederick Vesti secured his maiden FIA Formula 2 pole position despite having two laps deleted in an exciting qualifying session for Round 8 of the 2022 F2 season.

The ART Grand Prix driver, who called the Red Bull Ring a great track for him, delivered a lap of 1:14.123, beating Hitech’s Jüri Vips by 0.035s, which earns the 20-year-old two championship points.

Vesti already has a race win under his belt in Formula 2 this season after clinching victory in the Sprint Race in Baku.

Championship leader Felipe Drugovich put himself in a position to score more consistent points with fifth in the session, while closest challenger Théo Pourchaire ended up ninth after a late series of laps were deleted, the Frenchman at one point as low as 12th position.

Silverstone pole sitter and Feature Race winner Logan Sargeant secured third spot, ahead of Ayumu Iwasa, who made a late bid for pole as everyone else returned to the pit lane.

Perhaps the surprise performance of the session was that of Amaury Cordeel. The Belgian driver served a race-ban in the last round for collecting too many penalty points but returned with a stunning seventh fastest, just three-tenths of pole position.

Cordeel’s team mate Jake Hughes, who had topped practice, ended up a lowly 18th, while PREMA Racing will also be disappointed with their session, with Jehan Daruvala 11th and Dennis Hauger 15th.

Qualifying for Round 8 of the 2022 FIA Formula 2 Championship got underway with the Red Bull Ring in Spielberg bathed in sunshine.

The drivers took a few laps at the start of the session to build tyre temperature on the purple walled super-soft tyre, which had not been used in the morning practice session.

Ayumu Iwasa was the first driver to set a representative time but was quickly beaten by Felipe Drugovich before Silverstone pole winner Logan Sargeant leaped to the top of the timing tower, the first man into the 1m 14s.

Sargeant’s spell at the top did not last long as Virtuosi’s Jack Dooham blitzed a 1:14.559, to set the benchmark for the rest.

Jehan Daruvala, Clément Novalak, Dennis Hauger, and Frederick Vesti all had their first lap times deleted, while Vesti had his second time deleted too.

Sargeant responded to Doohan’s pace on his second run, but the Sprint Race winner from Silverstone went 0.010s quicker, although Sargeant’s time would later be deleted, leaving Australian Doohan four-tenths clear of Drugovich.

Following all the driver’s first efforts with the first set of tyres, Jack Doohan sat on provisional pole, which would be his third of the season.

Running with a clear track, Amaury Cordeel delivered a great lap on his return from a race ban for collecting too many penalty points, getting to within half a tenth of Doohan’s time in the Van Amersfoort Racing machine.

Into the final attempts for pole position we went and Drugovich went just under a tenth faster than Doohan, who snatched it back before Vesti, who finally managed a lap that counted, went more than a tenth and a half than the Aussie, who then saw his lap deleted, dropping him back behind Drugovich.

The final efforts saw Vips improve to second and Sargeant to third, but no one could beat Vesti’s time.

Theo Pourchaire was bumped down to 12th but a flurry of lap deletions rescued the Frenchman, who was promoted back up to 10th and reverse-grid pole.

There was still time for more late drama as Iwasa went again and despite the fastest middle sector, could only manage P4.

The Sprint Race starts at 17:55 CEST on Saturday and lights out for the Feature Race on Sunday is at 10:05 CEST.

You can join The F2 Show Live on YouTube and Twitch straight after the race as host Fraser Ford and guests dissect the action. 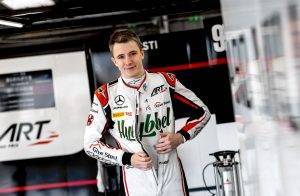