Jüri Vips has stormed his way to a maiden FIA Formula 2 victory, in a dramatic 100th race for the series.

David Beckmann and Jehan Daruvala joined the Hitech Grand Prix driver on the podium for Round 3’s second Sprint Race.

Trident’s Bent Viscaal started on reverse grid pole in Baku, ahead of fellow rookie, Beckmann, who then took the lead with a superb move on Lap 1.

Chaos unfolded behind as championship leader Guanyu Zhou locked up into Turn 1, spinning championship rival Dan Ticktum into the run off area. Ticktum was able to continue, but the Carlin driver dropped to down to 19th, as the Safety Car was deployed.

Lirim Zendeli was another driver to find the escape road and the MP Motorsport driver retired on the opening lap, after battling for positions in the midfield.

Théo Pourchaire pitted on Lap 3, due to front wing damage from an incident with Ralph Boschung coming out of Turn 1 on the first lap. Boschung was unable to continue due to the damage sustained.

On Lap 6, Roy Nissany locked his brakes and drove into the back of the second MP Motorsport of Richard Verschoor. This sent the Dutch driver into the wall and brought out another Safety Car.

Both drivers were clearly unhappy with each other over team radio.

Later on that same lap, Marcus Armstrong retired after attempting an overtake around the outside of Viscaal for fourth place. The Virtual Safety Car was deployed soon after.

A late move to the inside of Turn 1 saw Vips overtake Beckmann for the race lead on Lap 11, after spending a couple of laps in the Charouz’s mirrors.

Guilherme Samaia momentarily brought out the yellow flags in Sector 1 on Lap 16. The Brazilian driver ran deep into the escape road, but was able to reverse out with little drama.

Despite being spun at the start of the race, Ticktum was on the charge and eventually finished in sixth.

Oscar Piastri, who lined up 19th on the grid, rounded out the points finishers in eighth.

What a crazy race and a great way to celebrate 100 races of Formula 2! 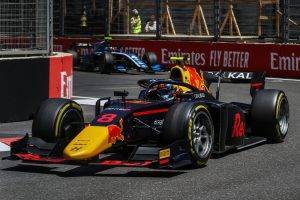