The Red Bull junior jumped into the #11 seat of Sergio Pérez during Free Practice 1, punching in some sterling laps, in a busy session.

Despite not maximising the speed of the car with a push lap and DRS, Vips’ stint, helped the team gather important data on the Formula 1 car’s aerodynamics.

Being a member of the Red Bull juniors, it was perhaps inevitable we’d see Vips in the Formula 1 car at some point this season, with the regulation change regarding running young drivers eligible for a super licence.

“It’s a great opportunity for Jüri. He’s going to be doing some important aerodynamic work for the team. It’s not about setting lap times and purple sectors, it’s an initiation for him as part of the programme where we have to run two sessions during the course of the year.

“It’s good for the programme. It’s a big responsibility for him, so it’s important we get the data that we need.”

Vips’ experience in the Red Bull simulator as part of the junior programme meant that he was prepared for any scenario:

“I was thinking about doing all of this preparation and being really ready, because I do all of the simulator work for them and testing set ups, and other different things. But I found out [in the FP1 test] I’m not really doing any push laps, and so there wasn’t really much of a preparation. Just the standard controls and procedures that I have to follow.

“There wasn’t much for me going on. Just collecting data and cruising at eighty percent.”

After the session, Vips was understandably jubilant when asked how he felt:

“Amazing! It was a really busy session. It wasn’t planned to do any push laps. We were just supposed to do aerodynamics. Just cruising around, which took some of the pressure off. Then we were on schedule and even ahead of schedule a little bit. I  was actually supposed to get a push lap in the end but I had traffic unfortunately. 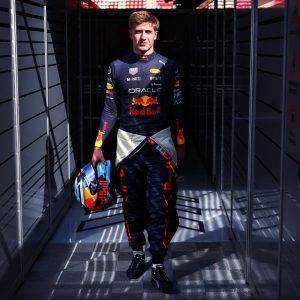