Vips and Lawson Raring to go in Sochi

Vips and Lawson Raring to go in Sochi

Hitech team mates Jüri Vips and Liam Lawson are raring to go ahead of the sixth round of the FIA Formula 2 Championship. The Red Bull Junior drivers are eager to put together a strong and clean weekend, hoping to improve on their results from Monza.

With rain on the forecast for this weekend, the conditions could play a big part in shaping the races. However, this will not deter Vips, as he declared: “Whatever the weather conditions I will be ready for it.”

The Estonian driver endured a difficult weekend last time out in Monza, falling down the order in the first Sprint Race after taking the lead at the start, and retiring in the Feature Race due to a mechanical issue.

Hoping for better this time round, he said: “I enjoy Sochi, so I am just looking for a clean weekend and improve on things that went wrong in Monza.”

The 21-year-old is looking forward to moving up the order during the race on a track which should provide overtaking opportunities.

“You can overtake at Sochi if you have a pace advantage, that is true in the dry and in the wet.”

Currently sitting sixth in the F2 Championship, the Hitech driver emphasised the need for consistency in a season that began with a disappointing opening round in which he was disqualified from the qualifying results, and was hampered by a car issue in the second Sprint Race which saw him tumbling out of the points.

“We need to put everything together really. We’ve lacked some consistency this year, obviously the Bahrain weekend put us behind and quite far away, otherwise we would still be up there in the championship.”

Hitech GP team mate Liam Lawson appears equally optimistic on the back of a busy period racing in DTM as well as F2. He took third and second place in Race 1 and Race 2 respectively in the sixth round of DTM last weekend and now leads the championship with the final two rounds taking place in early October.

“I’m looking forward to getting back in the Formula 2 car, it’s been a hectic couple of weeks and I’ve got a couple more of them left. Obviously this is the final F2 round for a while so it will be good to go into the break with a good weekend.”

The Kiwi is focused on learning how best to drive the Sochi circuit during the 40-minute Practice session in his first F2 outing at the track.

“It’s a track that I’ve been to before, it’s quite a cool track to drive. I’ve never done it in an F2 and I think the key will be getting through Free Practice cleanly. In my first year I had a crash in Free Practice and went into Quali with no practice time and round a street circuit like this it’s crucial not to do that.”

After showing excellent pace and taking good points in both Sprint Races in Monza, the Red Bull Junior driver was prevented from repeating those performances in the Feature race. His fire extinguisher went off during the race, forcing him to retire.

“At Monza we were fast, the car felt really really good, I don’t think that there is anything specific that we need to improve so much. What happened in Monza wasn’t our fault, the pace was really good there and hopefully that will carry on this weekend.”

Both Hitech drivers will hope to gain strong points this weekend to move up the order in the championship. To see how they fare, and to keep up with all the F2 action from Sochi, follow InsideF2 across our social media and check out all the latest F2 news on our website. 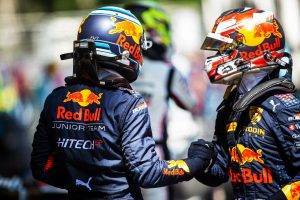