DAMS took points from a challenging Formula 2 weekend in Sochi.

Dan Ticktum scored points in both races on a frantic weekend for F2 in Russia.

The Brit climbed from 17th to 10th in the Feature Race, claiming the two points for the fastest lap as well.

Ticktum was also making progress in the Sprint Race before a red flag ended his charge and he finished eighth.

Ticktum said: “It’s the first time I’ve been to Sochi and it was a pretty mixed weekend. Qualifying wasn’t good; we couldn’t get the supersoft compound tyres switched on, which made the Feature Race difficult starting from 17th.

“We were quick and managed the tyres well, I lost some places on the start because of an incident ahead, but overall, we were happy with the pace.

“Starting from 10th in the Sprint Race, I felt we were quick again and could have made up some more spots.

“The focus is now on improving qualifying ahead of Bahrain.”

A crash denied Juri Vips the chance to show his full potential in his final appearance for DAMS in 2020.

A first-lap collision, which involved the Estonian forced him to retire in the Feature Race. However, he fought to 18th in the Sprint Race before the red flag.

Vips said: “It was a difficult weekend; I didn’t get many laps at all.

“We struggled in qualifying and couldn’t get the tyres up to temperature. The team worked very hard to solve the issues, but I got taken out in the Feature Race, which is a shame.

“We could’ve had the chance to recover some points and had a positive weekend were it not for the first race incident.

“I’d like to thank DAMS for the opportunity to race in F2 these last four rounds. I really enjoyed it and hope I can join the team again in the future.”

DAMS have expressed how thankful they are for the work that Vips’ has done during the last four rounds. However, Sean Gelael will be back in the car for the final two rounds in Bahrain in two months. 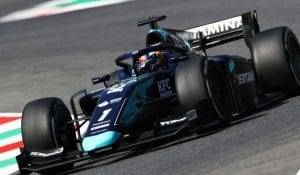