Jüri Vips kickstarted his Baku weekend in the best possible fashion after setting the fastest time of a chaotic FIA Formula 2 Practice session.

In a session full of drama, Vips kept his cool to go over a second quicker than Swiss veteran Ralph Boschung, who continued his excellent Monte Carlo form to finish second fastest for Campos.

With Formula 2 making its return to the streets of Baku for the first time in over two years, Practice was a learning session for most of the grid.

Lirim Zendeli was the first man to set a benchmark time. The German clocked in a 2:03.262, over three-tenths quicker than his MP Motorsport teammate, Richard Verschoor.

Oscar Piastri was next to top the timesheets with a 2:01.606 before Marcus Armstrong became the first driver to break into the 2:00s in his DAMS.

Marino Sato’s weekend got off to a bad start after going too deep into Turn 15. The error destroyed his right front suspension and front wing on his Trident, ending his Practice after just 11 minutes.

Zendeli was next to suffer a premature end to Practice with the German going down an escape road at Turn 16. Despite the best efforts of the Baku marshals, the German couldn’t get back on track and was forced to watch from the sidelines.

With the Virtual Safety Car being brought out to retrieve Zendeli’s stranded MP,  Armstrong led at the halfway point.  Piastri and Monaco Feature Race winner, Théo Pourchaire, joined the Australian at the top.

Jack Aitken briefly went fastest for HWA Racelab after producing a 1:57.840 on his first representative lap.

Dan Ticktum, on his first visit to the streets of Baku, then replaced his compatriot to go quickest by a tenth.

Robert Shwartzman got his weekend off to an excellent start with a 1:57.042, putting him top of the timesheets on what is set to be a crucial weekend for the Russian’s championship hopes.

Aitken touched the barrier after drifting his HWA car around the dusty Baku streets. Crucially, without sustaining damage.

Boschung then broke into the 1:56s, with the Charouz driver improving on his second run to increase the gap over second-place man, Ticktum, to over five-tenths.

Boschung’s reign at the top was ended by Vips, who produced a scintillating time of 1:55.210 to go fastest by over 1s – Strong pace by the Estonian, coupled with the power of the slipstream, punching his Hitech to the top of the timesheets.

Vips’ time wouldn’t be beaten as the session came to an early end. Roy Nissany destroyed his DAMS after suffering a huge accident at Turn 14, bringing out the red flag.

At the culmination of Practice, Vips lead Boschung and Pourchaire, followed by PREMA pair Shwartzman and Piastri. Armstrong rounded off the top six.

Bent Viscaal was seventh quickest ahead of David Beckmann and Ticktum, with Christian Lundgaard making the Top 10. 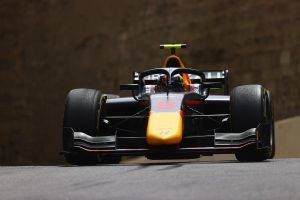