Vips Crash an ‘Instant Straw of Adrenaline’ for Sargeant

Vips Crash an ‘Instant Straw of Adrenaline’ for Sargeant

The Carlin driver was unsighted as he went into the twisty, tricky, castle section of the Azerbaijan circuit, when he happened upon Vips, crossing the circuit and coming to a slow stop, after contact with the barrier.

With just inches to spare, Sargeant, instinctively wrestled his car, narrowly avoiding a collision with the Estonian.

“For me, going into the corner, the yellows weren’t even out yet, so I had no idea.

“I was coming around there flat out. I saw him in the wall, and initially it seemed I needed to go around the outside. At the last minute I realised that wasn’t going to work, so I pretty much split the gap as much as I could on the inside. It was very very narrow, but fortunately I was able to find my way through. It was definitely an instant straw of adrenaline.”

This wasn’t the only crucial moment of the race for Sargeant, who had a great start, gaining two places on the first lap:

“I feel like my first lap was extremely good. I got up to fifth, and then from there I just tried to execute the best race I could. We had good pace, and we had a good pit-stop as well. It all just seemed to come together.”

The American kept a clean race, after some unlucky incidents during the season, where he could have seen more podiums:

“The potential has been here. But to deliver it has been extremely difficult. I just feel like the lack of experience has hurt in some places and I feel like I’m really starting to tick those boxes, and get over those hurdles.”

Highlighting what a quick learner he is, Sargeant was able to put yesterday’s Safety Car moments into practice, by nailing the three restarts today:

“I leaned a massive lesson yesterday with Safety Cars and VSCs on the restarts, and today they were really good. It’s stuff like that. You just have to learn from it.”

Staying within just a few seconds of Hauger and Vips, Sargeant was clearly maximising areas of the circuit, to balance the sections where he couldn’t:

“I was struggling a bit in Sector 2, where they were pulling a bit of a gap on me.

“But I’d say in general it was a good car, and a big thank you to the team.” 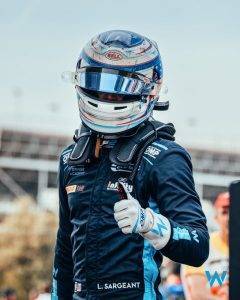