Juri Vips is looking forward to a new weekend with DAMS in Formula 2 as he gets ready for Russia.

The Estonian driver stepped into the car in Belgium and has only had six races in the car.

In the short amount of time Vips has been in Formula 2 he has impressed.  The 20-year-old claimed a podium in the Sprint Race at Mugello, in only his sixth race in the series.

Despite only joining the season in race 13, Vips currently sits in 16th in the standings only 10 points behind fellow Red Bull junior Jehan Daruvala, and ahead of the driver, he stepped in for, Sean Gelael.

The DAMS driver has the pace from last to call upon he won the F3 Sprint Race after taking third in the first race of the weekend before a penalty for a Safety Car infringement dropped him down the order.

“The track here is quite okay, the first two sectors I really enjoy, the third one is not bad, but it is a bit of an anti-climax. Not a bad track.

“The tyre allocation this weekend, Supersoft and Medium, is going to be a challenge for me as everyone else has used them and I have not. We’ll see, it could be to our advantage. I think it should be okay.”

Vips will want to carry on his momentum and have a good weekend in Sochi as he waits to be allowed into Japan to take his seat in Super Formula.

Vips will want to show what he can do this weekend with the uncertainty surrounding whether he will be in the car in Bahrain in two months or whether Gelael will be fit to race by then. 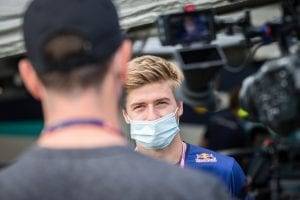