Juri Vips will replace injured Sean Gelael at DAMS and join Yuki Tsunoda and Jehan Daruvala in Formula 2 at Spa.

Yuki Tsunoda is chasing the Formula 2 title after an excellent weekend in Barcelona saw him gain points on his close championship rivals. The Japanese driver is currently 39 points of the lead and sits in fourth place in the standings with 6 more rounds left of the season and more points to play for.

Tsunoda said: “Barcelona was good, I think that we can improve though, learn from those races, we did OK but still need to find something more. At Spa, I hope to improve the race pace and get more good results as I really like the track. I think that last year Spa was the first time I got into the top 3 in Qualifying, so I am very much looking forward to it.”

Jehan Daruvala wants to return to form after some tremendous early-season pace faded just after he overcame his starting gremlins. The Indian driver admitted after Barcelona that he needed a week to sort himself out for the second half of the year.

Daruvala said: “It’s my favourite track, I’ve been very successful there, I don’t think I’ve ever been off the front row in all my times there, so I am very much looking forward to it and to getting a good result. I think we can improve a bit in Qualifying. I think that the car has been fast enough for the top 6 but to fight for pole, I think we need to improve a bit. F2 has been very inconsistent this year, things changing from one track to the next, so it is hard to predict. We need to be as consistent as we can.”

Juri Vips was hoping to be in Japan for the Super Formula series this year, but Covid-19 restrictions meant that he was unable to travel there. The Estonian driver has been driving in the Formula Regional European Championship, but the chance of an F2 drive with DAMS is a considerable step up for him. The 20-year-old has been eyeing up the opportunity for a drive in a big single-seater formula.

Vips said: “I’m really thankful of the opportunity, it’s really a great chance for me as I cannot get into Japan for the opening race in Super Formula. It’s very sad what has happened to Sean, and I hope he makes a quick recovery so he can get back in his car soon.

“There is absolutely no chance to test. I was just able to get a seat fitting etc. at the team’s headquarters at the beginning of the week. The first time I will drive the car will be Free Practice at Spa, and we know that there is not a lot of track time in an F2 weekend.

“I know that it is not going to be easy, it will be pretty difficult. It is certainly not an easy car to get in and drive. I will do everything that I can including going in the sim. Normally I am not a big fan of the sim, I prefer to talk to my race engineer, prepare everything with a very good understanding of what we plan to do, what things we need to concentrate on but in this case, I will take whatever preparation I can get.

“It will be great to do these three rounds, after that we just have to see what happens, they are supposed to ease the restrictions a bit for travel to Japan on September 1st, so that’s hopeful, but we can’t be sure.”

The Red Bull Juniors will be hoping to put their mark on the championship when the cars return to the track in Belgium. 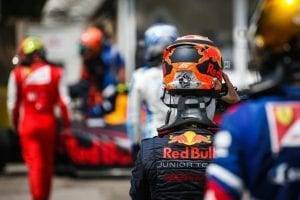