FIA Formula 2’s return to Baku is a thrilling prospect for Jüri Vips, with the Hitech driver ready to capitalise on the ‘absolute chaos’ the streets provide.

Following on from a lack of chances to overtake in Monaco, the Red Bull Junior driver is excited at the opportunity to fight throughout the tricky 6km circuit.

“I think this track is very, very unique, especially for the races. It is just by far the easiest place to overtake, and the races just tend to be really crazy here.

“Pretty much every lap you have some kind of an opportunity to do something, and it makes it really special.”

With only four of the 22 drivers this year having raced around the Azerbaijan Grand Prix track before, Vips will not be alone in trying to get to grips with the different challenges it poses.

The Estonian driver heads into this weekend with some momentum from Monte Carlo. After a poor run of luck and failing to score any points during the opening round in Bahrain, Vips recorded three points finishes last time out.

This included a third-place in the second Sprint Race, courtesy of his team mate Liam Lawson’s disqualification.

Yet despite Baku’s tendency towards the unpredictable and his success around other street circuits, Vips remains wary about how his weekend could unfold.

“It’s not like Monaco or Macau or anything like this. I think like 90% of the corners have exactly the same minimum speed, so it’s pretty weird.

“Honestly, you could even win starting from the pitlane on wet tyres I think if the race is crazy enough.

“It just really depends how the race is going to pan out because we have seen some races here that have maybe like one Safety Car, and it doesn’t really change that much the positions.”

Vips currently sits 10th in the drivers’ championship on 22 points, and he will be hoping to put in a strong performance this weekend, as he seeks to catch up to Red Bull stablemates Lawson in fifth and Daruvala in eighth.

Will Baku provide the chaos many expect or is it doomed to disappoint? Let us know 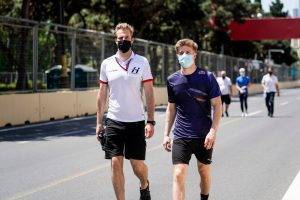