Jüri Vips stormed to victory in the FIA Formula 2 Feature Race on the streets of Baku claiming his second win of 2021.

The Estonian was flawless and thoroughly deserved his triumph in Azerbaijan with the PREMA duo Oscar Piastri and Robert Shwartzman driving to P2 and P3. This is a very good result for the Italian team.

Liam Lawson lined up on pole position for the Feature Race with Vips alongside him.

The start was aborted in Baku after Jack Aitken and Matteo Nannini couldn’t get off the line. They were pushed into the pit lane and the field went for a second formation lap.

Aitken, who chose to use the alternate strategy, eventually got into the race. Nannini didn’t have such good luck, he retired from the fight.

Lawson kept calm amidst all the drama getting a decent start. However Vips rocketed into the lead into Turn 1.

Further round the first lap, pole-sitter Lawson dropped back to third as Piastri made a great move into Turn 3 snatching second place from the Kiwi.

There was more drama later as Dan Ticktum dived to the inside of Théo Pourchaire making contact with the Frenchman.

Marcus Armstrong was an innocent party on the outside and got hit by Pourchaire and clattering into the barrier, ending the Kiwi’s Formula 2 Feature Race.

The Safety Car was deployed.

The collision dropped Pourchaire to the back of the field while Ticktum was pitting under the Safety Car with front wing damage.

The Safety Car came in at the end of Lap 2 with and Vips controlled the restart brilliantly, keeping the lead into Turn 1. Lawson reclaimed second place from Piastri slipping up the inside at Turn 3.

At the start of Lap 4 the Hitech duo of Vips and Lawson began to pull away from Piastri. Further back Shwartzman performed a textbook move improving to P7, getting ahead of Brazilian driver Felipe Drugovich.

Ticktum received a five second time penalty for the Lap 1 collision with Pouchaire and Armstrong. Just on Lap 5 his penalty got upgraded to a damaging 10 second penalty for the British driver.

Meanwhile, Shwartzman made yet more progress moving past Guanyu Zhou and into sixth position.

On Lap 6 Lawson began to hunt down Vips setting the fastest lap. However a dollop of disappointment confronted the Kiwi. He got a 10 second penalty for forcing another driver off the track.

Race leader Vips came for his mandatory pit stop switching Supersoft tyres for Medium ones at the earliest possible opportunity on Lap 6.

At the same time Richard Verschoor made contact with his compatriot Bent Viscaal at Turn 1.

As Vips got his Medium tyres up to temperature, his main rivals Lawson and Piastri came to serve their mandatory pit stop.

The Hitech driver also served his 10 second penalty which dropped him behind German driver David Beckmann.

On Lap 9 Vips repassed Piastri making use of DRS and a great slipstream on the main straight.

Further down the field, Lawson muscled his way past Beckmann for what was P11.

On the next lap, Shwartzman looked like a man possessed after his Formula 2 Sprint Race victory on Saturday, getting past Swiss driver Ralph Boschung and into fifth place.

On Lap 12, Vips set the fastest lap of the race and enjoyed a 2.7 second gap of the 2020 FIA Formula 3 champion Piastri.

As the race approached the halfway stage on Lap 13 Ticktum led the race ahead of Aitken, both drivers were yet to stop.

Piastri ran in second place on Lap 14 however the Australian received a five second penalty for an unsafe release. This allowed his teammate Shwartzman an opportunity to get fourth place from Piastri.

Lawson made yet another great move, this time storming past his fellow Red Bull junior backed driver Jehan Daruvala at Turn 3.

As Lap 18 rolled around Vips got held up by Alessio Deledda who was being lapped by the Estonian. The Italian subsequently received a drive-through penalty for ignoring blue flags.

This allowed Piastri to close the gap to just over 2 seconds from Vips.

Ticktum led the race on Lap 20, the Carlin driver hadn’t made his mandatory pit stop as Aitken followed him 10 seconds behind.

Vips rocketed past the British driver on Lap 21 moving up to second place making use of his much fresher tyres.

On Lap 22, Ticktum came into the pits for the Supersoft set and served his 10 second penalty. The British driver rejoined the race in P11.

Aitken followed suit just one lap later, the HWA Racelab driver came out of the pits in 12th place behind Lirim Zendeli and Ticktum.

With 5 laps to go UNI-Virtuosi’s Drugovich improved from fifth to fourth getting past Boschung.

On Lap 25 Guilherme Samaia found himself down the escape road but quickly recovered and got back on the track.

FIA Formula 2 Championship leader Zhou didn’t have the best of races and found himself in P13 and ended up with no points.

Up front Piastri quickly closed down race leader Vips and got within the 1 second DRS range.

Ticktum who had an eventful day in Baku showed blistering pace setting a new fastest lap of the Feature Race and eventually claimed eighth place.

With 2 laps to go Piastri continued to hassle Vips and crucially enjoyed a 10 second gap behind his teammate Shwartzman. This meant the Australian would keep hold of second place at the chequered flag.

As the last lap began Vips looked calm in the lead and brilliantly delivered his second victory of the weekend in terrific style. The Estonian drove without making mistakes and had great discipline all weekend.

Shwartzman rounded off the podium and drove to a very good P3.

After this magnificent weekend of action in Azerbaijan Formula 2 will roll onto the fast and flowing Silverstone Circuit in Britain. This exciting prospect will take place on the 16-18th of July. 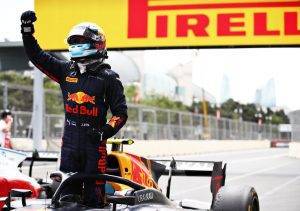