Jüri Vips decided to focus solely on the last FIA Formula 2 championship round in Abu Dhabi, walking out of a ‘messy weekend’ in Jeddah.

With just four hours after taking third place in the first race of the weekend, the Estonian driver’s fortune tumbled downhill after an unfavourable error.

Vips got too close to Felipe Drugovich’s UNI Virtuosi and ripped off his front wing, becoming the fifth retirement of Sprint Race 2.  Meanwhile, team mate Lawson spun his car and hit the wall with just two laps to go.

“Not the best weekend. The races were how they were. They were just a bit messy for everybody,” asserted the 21-year-old Red Bull Junior.

He continued, “One of the things we really need to work on is our one-lap pace. Hopefully, we will find some solutions for Abu Dhabi because that’s our biggest sticking point at the moment.”

In Sprint Race 2, Vips was initially able to stay close to Drugovich ahead who had just overtaken his Hitech. However, his overtaking attempt on the Brazilian failed miserably as Vips tried to cut back across, touching the back of Drugovich’s UNI Virtuosi.

Moreover, Vips admitted that it was a precarious action that wrecked his front wing:

“The second race I made a move where you either look like a hero or an idiot, and I came out of it as an idiot. It was just a very risky move and it didn’t pay off, an unfortunate end to Race 2 yesterday.”

Talking about the final race at the Jeddah Corniche Circuit, Vips wasn’t pleased with how the race played out, with only half points rewarded due to the two red flags emerging on the session.

The Red Bull Junior is ready to move on from the last event in Jeddah and looks forward to the three final races of the 2021 season.

“I think the grid was decided on a lottery, that was not correct so I lost a position, it was half points so we only lost one but in reality we were P5 today. So now I am just looking forward to the last race weekend and a busy week testing after that.” 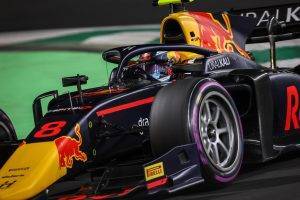