Vips sets the pace in disrupted Practice session in Azerbaijan

Vips sets the pace in disrupted Practice session in Azerbaijan

Jüri Vips topped a vital Practice session at the Baku City Circuit ahead of Liam Lawson and Marcus Armstrong.

Multiple red flags were brought out in a hugely disrupted session as Clement Novalak and Ralph Boschung stopped on-track.

Championship leader Felipe Drugovich had a relatively quiet session by his lofty standards ending up P7 for MP Motorsport behind Jehan Daruvala.

A flurry of cars left the pit lane at a very sunny Baku to complete their installation laps at the start of the 45 minute session.

The circuit was incredibly dusty in the opening stages of Practice, ten minutes into the session Liam Lawson set a 2:00.236 to top the timesheets for Carlin.

The majority of drivers attacked the high speed track while Hitech’s Vips and Armstrong sat in the pits.

Theo Pourchaire became he first driver to break the 2:00 barrier with a 1:59.592 which was quickly usurped by Lawson, Ayumu Iwasa, Daruvala and Boschung.

The times continued to tumble as Boschung set a 1:56.911 beating Lawson’s effort for MP Motorsport with the track relentlessly rubbering up.

All the drivers chose to use the yellow medium tyres during Practice with the purple super soft also available.

Clement Novalak stopped on the circuit and brought out the red flags with 25 minutes to go disrupting the session.

Practice resumed with 20 minutes remaining and plenty of drivers joined the track desperately trying to make up for lost track time.

Boschung clattered the barrier at Turn 5 which ended his session and forced yet another red flag. The barrier was repaired during the stoppage and the session got underway with six minutes to go in Azerbaijan.

Daruvala slotted into third place with a minute to go setting a 1:57.632 which was quickly beaten by Vips who finally showed his hand at the end of Practice.

The times tumbled rapidly after the chequered flag fell with Vips setting the quickest lap time with a 1:55.924 to finish the session ahead of Lawson and Armstrong. 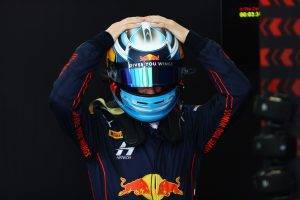