Jüri Vips showed promise in a strong practice session for the DAMS team at Mugello in only his third race weekend with the team.

Team mate Dan Ticktum was close behind in fifth.

It was a learning curve session for all the drivers on the grid, many of whom have never raced at this circuit. This practice session at Mugello could prove to be crucial for the Formula 2 Championship.

Track temperatures of 44 degrees, air temperatures of 29 degrees and a grainy track surface meant that tyre wear was going to put the Pirelli rubber and the drivers to the test.

Red Bull junior Jüri Vips took control of the session from the start.

Second-place finisher in Monza last weekend, Luca Ghiotto, managed to put in a strong lap in his Hitech to go second on the timing sheets with a 1:31.563.

The early half of the session saw close calls for Guanyu Zhou and Drugovich, who both had wide moments. The Brazilian driver caught the gravel but managed to keep the car on track.

Contrastingly, the first half of the session did not look too promising for the championship contenders.

The PREMAs of Mick Schumacher and Robert Shwartzman in 12th and 13th respectively.

The second half of the session saw the field focussed on race simulations, with the tyre wear making the possibility of additional pit stops this weekend increasingly likely.

The field lost several minutes of track time after Jack Aitken locked up his front left tyre in the final corner of the Mugello circuit.

As a result, the car slid through the gravel trap and meant a Virtual Safety Car was deployed with 10 minutes remaining on the clock.

So far this weekend has seen the stewards be fairly relaxed about track limits in Formula 1 and Formula 3. However, surprisingly towards the end of the session Dan Ticktum was flagged by Race Control for not following track limits at Turn 15.

He’ll be hoping this does not have any repercussions after being disqualified from his race win last time out in the Monza Sprint Race.

With tyre degradation being the focus at the end of the session, nobody was able to top Vips’s time ahead of Ghiotto and Drugovich.

Despite the incident towards the end of the session, Aitken was in seventh ahead of Mazepin, Lundgaard and Roy Nissany.

Louis Delétraz managed to finish in 11th ahead of the Ferrari Academy drivers of Schumacher, Shwartzman, Ilott and Marcus Armstrong.

Pedro Piquet was 16th ahead of the second UNI-Virtuosi of Zhou. 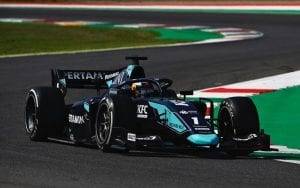