Vips Surprised to be on Pole in Baku

Vips Surprised to be on Pole in Baku

Jüri Vips was audibly surprised to be on Pole position for Sunday’s FIA Formula 2 Feature Race in Baku, after being told over team radio of his achievement:

“We have mini sectors on the delta, on the steering wheel. On the second lap I thought everybody would improve. I was four and a half tenths up before Turn 3, because I nailed the first two corners, but on Turn 3 I had the biggest lock-up and completely ruined the lap.

“I thought I was going to be outside the top 10 because everybody was going to improve, and I’d just ruined it. But when the radio message came that I was on Pole, I definitely didn’t expect it.”

After being quick through the middle sector, Vips felt he didn’t put in a clean lap throughout the ‘messy’ Qualifying session. It was clearly good enough to put the returning double winner at the front of the grid.

Making changes to the set up between the first and second run, and again during the Red Flag, after DAMS driver, Ayumu Iwasa, found the barrier, the Hitech team improved the car enough to secure the result.

“In the end when it mattered, the car was really really good.”

When pressed as to what changes were made, Vips teasingly responded:

“We have changed the car but I’m not going to tell you what.”

On his own mental preparation for this coming weekend, in Azerbaijan, the Red Bull Junior said:

“My approach, hasn’t really changed from last year. I guess you become slightly better and better, as you gain experience.

“Even if I wasn’t happy with the lap, we still made it to Pole, so Hitech did brilliantly today.” 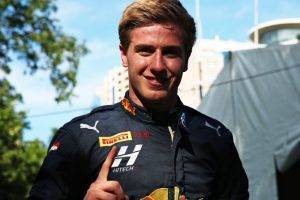