FIA Formula 2’s return to Imola was action packed for all of the grid, none more so than the Estonian driver Jüri Vips, who looked set for a great weekend.

As the Friday light faded from Autodromo Internazionale Enzo e Dino Ferrari – commonly known as Imola – the F2 drivers laid down the gauntlet one by one on a fast-drying track following a rain shower.

Jüri Vips of Hitech Grand Prix emerged as the victor and took the first pole of his F2 career on Friday with a 1m40.221s.

Saturday’s Sprint Race didn’t start well as he slid back a few places from P10 and needed to fight his way back through the field if he wanted to salvage any points.

Although the fast-charging Vips made headway and pulled off some incredible passes on a track that is difficult to overtake, he still finished P15 as the chequered flag fell. He recorded the fastest lap of the race but received no points for his speed.

Things didn’t improve in Sunday’s Feature Race for the Red Bull Junior. Vips suffered from massive wheel spin right off the start, and he was quickly swarmed by Ralph Boschung’s Campos and the fast-starting Roy Nissany in the DAMS.

By the time the pack got to Tamburello chicane, Vips had slipped back to P4. Unfortunately, the day was about to worsen when the Hitech driver lost it into Villeneuve on lap six, taking out a polystyrene board and bouncing back across the track ending his race in the barriers.

While the driver was fine despite the hefty crash, Jüri was visibly distraught about how his race unfolded as he smashed his hands against his halo.

The Estonian driver was very frank in his admission and said, “I haven’t had many worse days in my career.”

He further added, “I’ve got nothing to complain about, not reliability, nothing, the car is great. I have just thrown away a lot of points.”

Explaining his focus for the future, Vips said, “I have to change my approach to the Feature Race especially. It seems that the people who just keep on track and keep going end up with a good number of points.”

“Yes we were fast this weekend, pole and fastest lap in the Sprint Race. I got tapped early on, the steering wheel knocked out of my hands and triggered the pit limiter so lost a lot of time there.”

Summing up the Sunday nightmare in one sentence, he commented, “A big lesson for me today.” 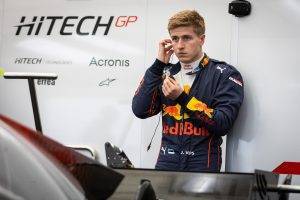