The Estonian, who has had a variable start to his championship campaign, has eventually set out his stall, following a questionable Sprint Race 1 earlier today.

“It was quite a poor performance from my side, and there were some things that I clearly did very wrong at the start that made my tyres degrade a lot more than they should have.”

After being fastest in Free Practice, and qualifying in P2, Vips started Sprint Race 1 in ninth position through the new reverse grid format. He gained just one place to finish eighth, thus starting the second sprint race in P3.

Studying the earlier session’s data on where he could improve, he applied his learning to turn around a, ‘not perfect’ weekend, into a very good weekend so far.

Describing the race as having, ‘less chaos than further up the field’, his ethos was to:

“Not panic and try to stay on top of things, with a little bit of experience to help.”

Ambient temperatures also affected the set-up of the car, specifically the brakes, that are made of carbon and therefore, very sensitive.

The cooler early evening temperatures made a difference to this morning’s session, and changes had to be made to the set up of the car.

This benefitted the Hitech driver in Sprint Race 2, as he admitted:

“I didn’t nail it this morning.”

During the second sprint race he knew he had a pace advantage over Bent Viscaal and David Beckmann, who started ahead of him on the track.

“I tried to stay out of trouble. There were some close moments on the restarts, and I managed to avoid the barriers and crashing with other drivers.”

Despite the win, he’s already looking ahead to Sunday’s Feature Race:

“We can still improve quite a lot for tomorrow.”

Vips, perhaps unfairly, had high expectation on his shoulders coming into this season, because of his previous Formula 2 experience. However, he is now proving he’s not only a quick and intelligent driver, he’s a race winner and championship contender, if he can maintain this weekend’s success.

Vips starts on the first row of the grid in tomorrow’s Feature Race, behind Liam Lawson who had an eventful Saturday of his own.

Following today’s masterclass in patience and careful calculation, can Vips take an early lead and make further history with a Baku double? 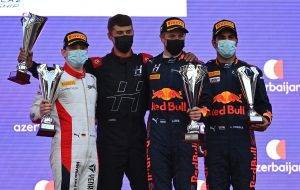