Vips Victorious in Monza as Drugovich Seals the Championship

Vips Victorious in Monza as Drugovich Seals the Championship

Jüri Vips took his first win of the season in Saturday’s Monza Sprint Race in a largely uncontested affair as Felipe Drugovich was crowned champion of the 2022 FIA Formula 2 season from the pit lane after an early-race retirement.

Vesti was the driver to lead the pack away from reverse grid pole, ahead of Carlin’s Logan Sargeant. Felipe Drugovich started from the middle of the pack after receiving a five-place grid penalty for failing to slow for yellow flags.

When the lights went out, Sargeant struggled to get off the line, making the run into Turn 1 slightly clearer than Vesti would’ve anticipated, and the ART driver kept the race lead.

Behind the leaders, championship leader, Drugovich came together with Amaury Cordeel at the Della Roggia chicane. He was left with no room on the exit of Turn 5 after making an overtake on the Belgian driver.

Drugovich could still win the championship, depending on how many positions Théo Pourchaire could make up from 14th on the grid. Pourchaire made some progress up to 11th place until the field fell into a DRS train after incidents in the opening stages.

Aside from Drugovich’s retirement with a broken front-right suspension, Tatiana Calderon and Olli Caldwell collided at Turn 1. The three retirements triggered a Safety Car to take to the Monza track.

Vips took the lead into Turn 1 at the safety car restart. He took advantage of the slipstream down the main straight and overtook Vesti around the outside.

To add more misfortune to MP Motorsport’s race Clément Novalak picked up front wing damage and a front left puncture at Turn 4 whilst trying to make an overtake on Ralph Boschung. As a  result, both drivers pitted, and Boschung was also forced to retire his car after he sustained steering column damage during the incident.

After taking his time to line up a move on Liam Lawson ahead, Pourchaire attempted to overtake Lawson on Lap 14 around the outside of Turn 1 but was shown the gravel trap by the Kiwi driver.

The move dropped him to the very back of the field and well out of the running for a top-eight point-scoring finish. Pourchaire was given a five-second penalty for his part in the collision.

Ayumu Iwasa was also handed a five-second time penalty for leaving the track and gaining an advantage after going across the track at Turn 1 while battling for position with David Beckmann.

Out front, Vips was the first driver to see the chequered flag in Monza. He drove a quiet but dominant and convincing race to take his first win of the season. He would be joined by Vesti and Jehan Daruvala on the podium.

After an incredible season with five race wins together with MP Motorsport, Felipe Drugovich sealed the 2022 championship with three races to go in the season. Despite not finishing the Sprint Race in Monza, a consistent season in the first twelve rounds was enough to clinch it so early. 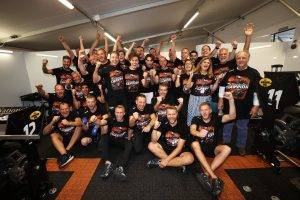