In a year of great uncertainty, Formula 2 preserved and managed to conduct twelve race weekends at nine different venues on two continents.

One of those teams who had to adapt to the changing landscape was UNI-Virtuosi. Virtuosi owners Declan Lohan and Andy Roche discussed the challenges and rewards of the 2020 season with us.

2020’s calendar saw the series set to visit The Netherlands for the first time along with visits to Abu Dhabi and Bahrain to compliment the annual visits to Monte Carlo, Silverstone, Spa Francorchamps and Monza.

Despite the Formula 2 teams attending mid-March testing in Bahrain as normal, the impact of COVID globally saw sporting events being cancelled and/or postponed.

Team owners Declan Lohan, Andy Roche and Paul Devlin could sense the season would be massively affected at this time.

“It was about the second week of March when we did the test in Bahrain and we were due to go back home before heading back to Bahrain in the third week of March for the race and that’s when they cancelled it.”

Shortly after the Bahrain round was postponed, Formula 2’s visits to Monte Carlo, France and Holland were also cancelled. With the months passing the chances of a season not even starting looked increasingly higher.

“There was a lot of worries on the side of our employees and our drivers with their sponsors. We didn’t know whether we were going to get back racing”.

Lohan praised the support that they received from the FIA during the lockdown period when the series worked together with Formula 1 and Formula 3 to get the series back on the road again.

“The support we received from the FIA was fantastic in that they helped us along with Formula 1 to get the series back on track again.”

“They formed a calendar very quickly and communicated with the different governments to let sporting teams travel.

Formula 2’s management did well in the opinion of the teams to keep stakeholders in the loop on the latest developments.

“Bruno Michel and Formula 2’s support at the time was excellent, Bruno was onto Andy all the time and he kept us filled in on what was happening so we couldn’t have asked for better support”.

June saw the announcement that the season would finally commence on July 5th in Austria. Formula 2, Formula 3 and the Porsche Supercup would be travelling with the Formula 1 teams to begin a provisional set of season events.

In the run-up to cars leaving the pit lane, there would be several changes to the way Formula 2 teams would operate for safety reason during a race weekend.

Roche recalls how the team overcame these issues.

“The biggest challenges included arranging the travel and making sure we were Covid free beforehand. Once we were at the events it was easily controlled by the FIA which worked really well.”

“Flights were getting cancelled twenty-four hours before we were due to go.  We ended up driving,  that was the biggest task initially in getting everyone where they need to be and covid free”.

But on July 3rd Formula 2 finally roared into life for the first practice session of the season much to the relief of Roche, Lohan and Devlin.

“We felt a lot of relief that at last, we were racing but also anxious on whether we would make it through the full twelve races of the season.”

The 2020 season would be a one of two very different tales in the Virtuosi garage. Both cars painted in the two different coloured schemes for the returning Renault junior Guanyu Zhou and the new Ferrari Development Academy driver Callum Ilott.

Zhou started the season with a pole in the first Austria meeting but things fell away during the race when a technical gremlin struck, costing him a potential Feature race win.

Despite being a tipped title contender Zhou would only get his maiden win during the Sprint race at Sochi, in a race halted following Jack Aitken and Luca Ghiotto’s huge accident.

Roche believes Zhou’s rotten luck cost him a shot at the championship.

“He had quite a lot of bad luck, I think everyone expected more from him this year. There were engine issues in Austria that cost him a win and I think he’s just had some bad luck through the year, although, it started to come back to him near the end of the year.”

In contrast, Ilott had a superb 2020 season with three race wins and five positions as the Brit narrowly missed out on the driver’s championship to Mick Schumacher.

“I was very impressed with him, he was undoubtedly the quickest man over one lap! no question about it! the five pole positions prove that.”

“He’s been a joy to work with, professional when needed, and he’s been great fun to have around the team. It’s just a shame he didn’t win the title which i feel he deserved.”

Ilott will be replaced by Brazilian Felipe Drugovich for 2021 who surprised many with three race wins in his debut season for MP Motorsport.

“I was very impressed by him, hence why I signed him. From what I’ve seen he’s done very well and to get three wins in his rookie season. I am hoping for big things in 2021.”

2021 will see a vastly different Formula 2 format with now three races instead of the two that Formula 2 has come accustomed too. This means a reduction in the number of race weekends that will take place as the series moves from twelve to eight weekends while visiting Saudi Arabia for the first time.

“It will be interesting. The weekend will be a lot different from what we’re used too.”

“The venues could have been a bit nicer for us if I am being honest, I think 2021 will be a tough year.”

UNI-Virtuosi has yet to confirm a second driver to pair alongside Drugovich at the time of writing for 2021. Many expect that we will see Zhou again but we will wait and see what news comes ahead of the season.

InsideF2 would like to thank UNI-Virtuosi, Declan Lohan and Andy Roche for giving us their time. 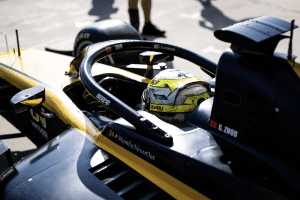