Bent Viscaal delivered a personal best to take a convincing second place in his rookie season of the FIA Formula 2 championship.

Qualifying in 18th on Friday the Dutchman drove a masterclass of a race to finish seventh in this morning’s Sprint.

Starting Race 2 in P4, he then continued to demonstrate his skills and took his first F2 podium.

“It feels very good to be on the podium, especially after qualifying in P18, as it’s a bit of a weak point for us, but our race-pace is strong.

With rising track temperatures and lack of a headwind affecting the usually advantageous tow the circuit offers, Viscaal remained on the back of David Beckmann, until Lap 19 out of the 21 lap race, until the applied pressure paid off.

Beckmann out-braked himself, and despite a brief block when rejoining the circuit, Viscaal held position and finished the race ahead.

“I kept pressure on Beckmann for the race. There was dirty air in Sector 2, and so every time I was 10m shy of making the move, I couldn’t.

“I saw he was struggling with his tyres, especially in the last sector and he out-braked himself. Luckily for me I could go into second place.”

Trident have struggled to make an impact in Formula 2, but Viscaal is confident they can improve as he believes the structure is there to become a top team.

“The team are amazing. It was a hard season for them last year, and this so far. They’ve had their ups and downs. But the team can be in the top five and achieve podiums.

“Qualifying pace is something we need to figure out because once we’re at the front we can fight. As you can see we can get the podium.”

The celebrations will remain on hold until the end of the weekend. But, Viscaal is happy with his Race 2 finish:

“It’s home soil so everyone is happy. There are a lot of Italian and Dutch fans here so it’s a double home race for me.”

“I’m very happy, and I’m looking forward to the next race tomorrow, to gain as many positions as possible.”

Starting tomorrow’s Feature Race 18th on the grid, can he thrill Formula 2 fans by giving more of the same? 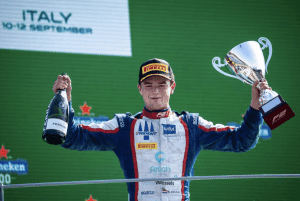