It was 77 days from the season-opener in Miami when Jamie Chadwick decided to pull off two stunning overtakes at Circuit Paul Ricard to secure her seventh straight W Series victories, all the while extending her championship lead in the standings with 47 point lead over Abbi Pulling.

Chadwick has impressed the grid once again by taking another first-place trophy for the new Jenner Racing team, following up that dramatic victories with three dominant lights-to-flag wins in Miami, Barcelona, and Silverstone.

Despite taking a two-place grid penalty after securing pole position in Qualifying, the Briton still found her way to have an unbothered race after retaking the lead from Quantfury’s Belen Garcia around the scorching hot French weather.

Speaking after the race, she said: “I enjoyed that one, and it makes up for yesterday. Getting pole position and having that taken away, I felt like I needed to make amends today.

“I’m really happy. Beitske [Visser] kept me honest initially and I moved back after the safety car, so I’m happy that I got my head down after that and it feels great to get another win.”

The defending champion Jamie Chadwick still leads the Drivers’ Championship standings with a commanding 70-point lead over Racing X’s rookie Abbi Pulling, as Beitske Visser and Belen Garcia moved to third and fourth, respectively, after the round in Le Castellet.

Nerea Marti slipped to fifth with only one point separating her from Alice Powell, who has earned 44 points in sixth, ahead of Emma Kimilainen in seventh. Further down, Jessica Hawkins finished in the final points-paying position from the weekend, which puts her in eighth with 27 points ahead of Fabienne Wohlwend and Marta Garcia.

Moreover, make sure to find out everything that went down in the fourth round of the 2022 season in Circuit Paul Ricard.

Sirin Racing’s Beitske Visser pulled out a promising performance in the city of Marseille for the first time to top the session opener with a 2:03.744, beating Marta Garcia second by just six thousand of a second and her compatriot Nerea Marti, who also briefly led the field.

Reigning champion Jamie Chadwick had to settle just outside the top three, as the Jenner Racing driver couldn’t improve on her attempt to beat Visser’s lap times, with Belen Garcia rounding out the top five in the second Quantfury car.

Abbi Pulling struggled in the session’s early minutes, putting her in sixth fastest ahead of her mentor and fellow Alpine F1 team-associated driver Alice Powell in seventh, as Fabienne Wohlwend and Emma Kimilianen finished in the eighth and ninth fastest, respectively.

Despite spinning on her final attempt to set a quicker lap time, Abbie Eaton retained her position in tenth fastest for Scuderia W.

Visser continued to dominate the weekend by taking her maiden W Series pole position after Chadwick received a two-place grid penalty after the session for crossing the white line at the pit-lane exit in the closing stages.

The decision quickly promoted the Dutch driver to start from pole for Saturday’s race, alongside Quantfury’s Nerea Marti. She made a sterling effort to hold her position in the top three despite getting her lap time deleted for exceeding track limits as compatriot Marta Garcia claimed third for CortDao.

Marti’s teammate Belen Garcia secured her best starting grid of the season in fourth, ahead of Scuderia W’s Abbie Eaton in fifth and the second CortDAO driver Fabienne Wohlwend in sixth.

Both British drivers, Jessica Hawinks and Sarah Moore, completed the session in the seventh and eighth position, whilst Emma Kimilainen placed her PUMA car in ninth, and lastly, Alice Powell.

Jamie Chadwick conquered the fourth race of the season to secure her seventh consecutive win in the series, despite receiving a two-place grid penalty.

The race started with a dramatic contact that ended Abbie Eaton’s race, as Chadwick took the lead from Beitske Visser under the scorching French weather to make amends for Saturday’s penalties.

Just three minutes behind Chadwick, there was some intense overtake from Belen Garcia to beat Visser, as her Quantfury teammate, Nerea Marti, followed to take the podium’s final step, which leaves Visser in fourth.

Alice Powell made up more places than any driver, starting from 11th on the grid to fifth ahead of both CortDAO’s drivers Marta Garcia and Fabienne Wohlwend in sixth and seventh, respectively, after numerous wheel-to-wheel actions between the two.

Finally, Sarah Moore placed her Scuderia W’s in eighth ahead of compatriots Abbi Pulling in ninth for Racing X and Jessica Hawkins taking the final points-paying position for Click2Drive.

The all-female single-seaters racing series will be back for the fifth race of the season in Hungary, as the 19-strong grid will race around the city of Budapest for the first time this weekend, starting from the 29th of July. 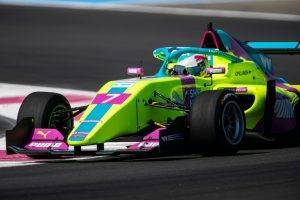