After 195 days, following the nail-biting finale, the W Series season opener is finally done and dusted, with the reigning double champion Jamie Chadwick taking both victories in the all-new American venue in Miami.

The new team, owned and managed by the former gold medalist Caitlyn Jenner remained positive in terms of going for gold this season after the successful debut on the team’s home soil, as Chadwick’s teammate Chloe Chambers, who was famous for breaking the fastest vehicle slalom word record was the highest placed rookie from the weekend.

Further down, the entire grid is getting far more competitive than in prior seasons, with five rookies mixed in with plenty of experience, the series continues to get more challenging.

Chadwick remains undefeatable in the Drivers’ Championship after winning two consecutive titles. Scoring points with 50 points, ahead of the Spaniard Nerea Marti with 21 points, while Beitske Visser completed the current top three.

In a closely-contested battle of the British drivers, Abbi Pulling gave a brilliant performance in her first full W Series campaign, with a two-point lead over compatriots Jessica Hawkins and Alice Powell, who both scored 18 points.

Moreover, make sure to find out everything that went down in the first round of the 2022 season in Miami.

Click2drive Bristol Street Motor Racing’s Alice Powell made a perfect start into the 2022 season, setting the fastest time overall with a 1:57.118, less than one-tenth of CortDAO’s Fabienne Wohlwend in second, who completed the most laps in the free practice.

The session went smoothly for Powell in sunny American weather, despite a reasonably dramatic session with two of the Academy drivers, Bianca Bustamante and Juju Noda, hitting the wall on their W Series debut.

Bustamante brought a red flag halfway through the session, preventing the other drivers from continuing their preparations on the brand new circuit.

Teammate Juju Noda was the fastest driver amongst the other five debutants in 14th fastest, despite facing difficulties in the remaining five seconds of the free practice session.

Further down, the defending champion Jamie Chadwick made a solid start into the season in third fastest for Jenner Racing, with the highest placed rookie in 2021, Nerea Marti, in fourth for Quantfury, ahead of the Finn Emma Kimilainen, completed the first top-five from the season.

Scuderia W’s Sarah Moore was sixth fastest, ahead of Beitske Visser in seventh in the 1m57s. The second Click2Drive’s Jesicca Hawkins placed the electric blue car in eighth fastest.

Finally, Belen Garcia made it to ninth fastest, as the Racing X’s rookie Bruna Tomaselli rounded out the top 10 from Miami’s free practice session.

Nerea Marti claimed her own and Quanfury’s maiden pole position in a frantic Qualifying session in the first-ever Miami Grand Prix. The Spanish star clocked in with an unrivalled time of 1:56.915, beating the double W Series champion Jamie Chadwick second.

Last season, the Spaniard was the highest-placed rookie, earning one podium in her debut with Academy.

The session started well for defending champion Chadwick, whom improved by more than half a second to establish the quickest time of the weekend with less than three minutes to go, becoming the first driver to go under 1m57s on her next flying lap to claim the provisional pole.

Marti went fastest by seven-hundredths of a second late on, viewer watched on as Alice Powell was potentially able to beat that time on her final run having been two tenths ahead after the first two sectors. A late twist saw Fabienne collide with the wall at Turn 3, ending the session early, thus handing Marti her maiden W Series pole position.

The pair became the only two drivers from the grid who set the 1m56s benchmark, as Click2Drive’s Alice Powell secured third with a time of 1:57.437, ahead of Puma’s Emma Kimilainen in fourth, and CortDAO’s Fabienne Wohlwend.

Jessica Hawkins made it to sixth in the second Click2Driver car, ahead of Marti’s teammate Belen Garcia.

Sarah Moore placed her Scuderia W car in ninth as the only driver from the team to enter the top 10 from qualifying, ahead of compatriot Abbi Pulling in ninth for Racing X, as CortDAO’s Marta Garcia was only 0.030s off Pulling’s time in tenth.

Moreover, from this qualifying session, Marti has secured her starting position for Race 2 in the front row alongside Chadwick, as the drivers’ second-best time determined the starting grid for the weekend’s second race.

Polesitter Nerea Marti gave away her chance of leading the due to an unfortunate getaway and a stall on the line, this cost her five valuable positions.

It turned out to be a relatively easy win for Jamie Chadwick, who quickly took over from second to dominate as she has often done from out front to claim her seventh W Series career win, even though Puma’s Emma Kimilainen was hunting for glory in the Miami Grand Prix.

The Finnish driver was battling Chadwick, she closed the gap a few times but couldn’t make the overtake stick.

It was a heartbreaking end to the race as Kimilainen’s car ended up being involved in a late contact, which saw her need to retire from the session.

As a result, Hawkins ended up in the second place after Garcia was given the penalties following the incident with Kimilainen, as Sirin Racing’s Beitske Visser took the final spot on the podium having started from 12th.

Abbi Pulling finished fourth, one place above her teammate Bruna Tomaselli in fifth, who made good progress from 14th. Polesitter Nerea Marti managed to salvage some points as she finished in sixth.

Her teammate, Belen Garcia, completed Race 1 in seventh, ahead of Sarah Moore as Scuderia W’s only driver to finish the race as Abbie Eaton collied with CortDAO’s Fabienne Wohlwend, to bring out a yellow flag during the session.

Despite having a disappointing free practice session, Bianca Bustamante made it to ninth, earning her first championship points, as Sirin Racing’s Emely De Heus rounded out the top 10.

Marti was starting in second and battled well to keep her place ahead of the Finnish driver Kimilainen. The experienced Fin was battling as hard as she did in Race 1 to seize every opportunity.

The weekend in Miami wasn’t turning out to be a memorable one for Kimilainen, as she tangled with Alice Powell at Turn 17 and dropped back to fifth.

Marti’s teammate and compatriot Belen Garcia completed Race 2 in fourth as her best race finish result to date, ahead of the unfortunate Kimilainen, who retained her place inside the top five, despite looking to have pace all weekend.

Racing X’s Abbi Pulling was the quickest driver on the track. Her engineer told her over the radio to make a move on Sirin Racing’s Beitske Visser with some fine overtaking in the closing stages, which the Briton did, to claim sixth, ahead of Visser.

Sarah Moore once again finished eighth for Scuderia W, ahead of CortDAO’s Marta Garcia in ninth, as Jenner Racing’s Chloe Chambers completed the top 10 as the highest-placed of the five drivers making their debuts in Miami.

The W Series will be back in action for the second round of the season in Barcelona, starting from the 20th of May, applying their learnings from the pre-season test in the same venue. 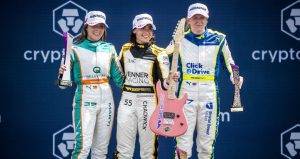