The winter break is finally over and F2 heads to Bahrain for the first round of the 2021 championship. After some incredible action last year which included Mick Schumacher claiming the title at a dramatic showdown in Sakhir, Formula 2 will be aiming to produce some more brilliant racing this season.

Formula 2 is seeing plenty of changes on and off the track in 2021 with new drivers, circuits, and an all new weekend format.

The new format comprises of a practice and qualifying session on Friday before a double header of Sprint race action on Saturday. An hour long Feature race on Sunday will round off the weekend’s action for F2 this year.

F2 is welcoming a number of rookies for 2021 including FIA F3 champion Oscar Piastri who will be partnering Ferrari junior Robert Shwartzman at Prema. Piastri’s F3 title rival, Theo Pourchaire is also moving into the second tier of motorsport, the 17 year old will be racing for ART.

Other rookies include Formula Regional Open Champion Gianluca Petecof and Juri Vips, who will be embarking on his first full season in Formula 2.

F2 also has a radically changed calendar for 2021 with 8 rounds instead of 12. Catalunya, Red Bull Ring and Spa-Francorchamps are all noteable absentees.

However the 8 unique circuits F2 have lined up for 2021 should be absolutely brilliant with Bahrain kicking off, Monaco and Monza are to come later this year. The drivers and teams will also be faced with a new street circuit in Jeddah, Saudi Arabia.

Meanwhile, Bahrain will host round 1 of the season. The Sakhir International Circuit is a brilliant facility located just outside the nation’s capital Manama. The circuit hosted its first Formula 1 Grand Prix in 2004, the race was won by Michael Schumacher.

The track itself is super fast and spine tingling, the 3.3 mile ribbon of tarmac is home to 15 corners and 3 DRS zones before turns 1,4, and 11.

Turn 1 represents the best overtaking chance of the lap with a heavy braking zone into the right handed hairpin before the switchbacks of turns 2 and 3.

The most difficult section of the circuit is the turns 9 and 10 complex, it’s a downhill left hander that’s bumpy on the entry. It’s very easy to lock the left front tire and lose time hand over fist. And with a DRS zone immediately after the notorious turn 10, it creates even more pressure on the drivers to get that particular corner right.

The track has also created some great racing over the years including Nico Rosbergs brilliant double victory in 2005 and more recently Charles Leclercs magic triumph in the 2017 Sprint race.

The 2020 Bahrain event saw great action to with Felipe Drugovich and Robert Shwartzman taking a victory each right under the nose of Formula 1.

Only time will tell if those two drivers can repeat their Bahrain success or will someone else start their season with a bang in Sakhir?

Check out our Track Guide for the Bahrain Internation Circuit. 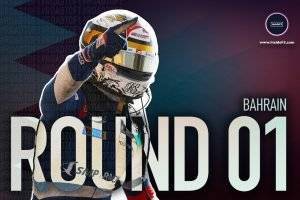