After a brilliant weekend of action in Russia last time out which saw Mick Schumacher extend his Championship lead over fellow Ferrari academy driver Callum Ilott to a commanding 22 points.

Formula 2 heads to Bahrain for the first instalment of a season ending double header at the Sakhir International Circuit comprising two separate layouts.

Sakhir was first raced on by F2 in 2005 and has produced some incredible racing over the years including Charles Leclerc’s epic charge through the field in 2017’s Sprint Race and who could forget Lando Norris’ wonderful drive to take the win in the 2018 Feature Race.

The Sakhir International Circuit is a world class venue located just outside Bahrain’s capital of Manama.

The Circuit itself is technically challenging but super quick. The track is 5.4km long and home to 15 corners including the heavy braking zones of Turn 1 and Turn 4 alongside the tricky, downhill left of Turn 10.

On top of these impressive corners, the drivers will be pleased to see acres of runoff on the outside making it easier to recover from mistakes but this is still a test of driving skill.

3 DRS zones into Turns 1,4 and 11 should help overtaking on the 15 Turn course but setting up the car will be a challenge due to Sakhirs mix of long straights and slow corners.

The weather could also play a big part in the outcome this weekend, rain is forecast for Saturday and Sunday which will make Bahrains 5.4km Circuit a whole new challenge for the drivers.

With just 2 rounds to go in this years F2 Championship the race for the title is more intense than ever. It seems just a couple of drivers have the chance to clinch the crown.

The duo of drivers in question are Mick Schumacher and Callum Ilott. Both drivers have had their ups and downs so far this season with Schumacher taking 2 wins to Ilotts 3 in 2020.

However, a collision in the closing stages of the Sprint Race back in August during the British Grand Prix weekend is the only blot on their copybook.

Schumacher drove superbly in Russia last time out to take a win in the Feature Race after fending off Yuki Tsunoda while a third place also came his way in Sochi. The German will be looking to keep up the momentum this weekend at a Circuit he knows well.

The Prema driver drove very respectfully at Bahrain last year picking up points in both races over the weekend. Schumachers Championship rival Callum Ilott also knows the Sakhir track like the back of his hand having raced on it in 2019 although the event didn’t go as planned for the Briton, he ended up with 0 points.

The battle for third in the drivers championship is also fiercely contested between the likes of Yuki Tsunoda, Christian Lundgaard, Robert Shwartzman and Nikita Mazepin.

Just 7 points separate the quartet with 2 rounds left and with possible F1 drives at stake this will be and intriguing battle to watch for in the dying embers of this years Championship.

As Prema have a chance at the drivers title with Mick Schumacher, the Italian team also have a huge opportunity to claim the teams title for 2020 as they lead with 331 points which is 42.5 more than their nearest challenger Uni Virtuosi.

If Prema do clinch the teams crown then it will be their first teams title since Antonio Giovinazzi and Pierre Gasly in 2016.

With all this in mind the Bahrain round of the 2020 FIA F2 Championship should be an absolute thriller.

Here are all the times you need to know this weekend. All times are local. GMT +3 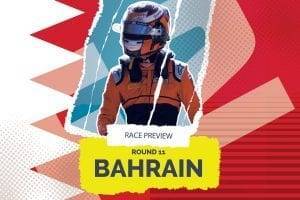