After 11 rounds of thrilling action in the 2020 FIA F2 season, the 12th and final round will be held at the Sakhir International Circuit in Bahrain completing a double header to round off the season.

Felipe Drugovich and Robert Shwartzman capitalised on all the drama that occurred around them to enjoy a wonderful victory each right under the nose of Formula 1.

Title contender Callum Ilott will have a point to prove in Sakhir after his indifferent weekend last time out. The Briton scored a great second place in the Feature Race before a damaging Sprint Race on Sunday finishing with 0 points, after a collision with Jehan Daruvala at the tricky Turn 10.

Meanwhile, Championship leader Mick Schumacher also had a mixed weekend in Bahrain finishing fourth in Race 1 before picking up just 2 points in the Sprint Race by finishing in seventh. Over the course of the weekend, the German saw his points lead cut from 22 points down to just 14 with one round left to go.

The title battle is wide open with Mick Schumacher holding a slim 14 point advantage over Uni-Virtuosi driver Callum Ilott. With a maximum of 48 points still available the Championship is still well up for grabs. There are 4 points for Pole Position putting extra pressure on Fridays Qualifying session and track position is all important despite the circuits high speed nature.

Whatever happens this weekend, this will be Callum Ilotts last F2 event for the foreseeable future as he recently announced that he wont return to the series in 2021.

F2 will be stepping into unchartered territory this weekend as instead of the Grand Prix layout, Formula 2 will be racing on the Outer Loop and has the potential to crown the season with an extraordinary weekend of racing. The track is comprised of many long straights which should allow for lots of slipstreaming especially with the DRS available on the run towards Turns 1 and 4.

The Outer Loop is 2.2 miles long and is home to just 11 corners making this circuit a very different challenge to what the drivers are used to when they head to Bahrain.

The track itself utilises the normal main straight and turns 1,2 and 3 before parting ways with Grand Prix layout after Turn 4. The Outer Loop goes left and onto the perimeter of the Sakhir International Circuit. Turns 5 and 6 are fairly quick meanwhile Turns 7 and 8 make up a clumsy left right chicane with an awkward crest on the exit right before the drivers rejoin the main Grand Prix layout plunging downhill towards the final corner.

Carlin driver Yuki Tsunoda will be looking to bounce back after a disappointing weekend in Bahrain which derailed before it even started as Tsunoda spun and stalled the car in qualifying forcing him to start from the back in the Feature Race.

The Japanese driver thus fell outside of the top four in the Championship and now lies fifth. Fourth in the standings would be enough to give the Honda junior enough super license to land a possible Formula 1 driver for 2021.

Tsunoda does have competition for a top four place in the championship though in the shape of Russian duo Robert Shwartzman and Nikita Mazepin who currently stand third and fourth in the championship. The gap between all three young stars is a measly five points in Mazepins favour. This should be a hotly contested fight and one to watch on track.

In the teams Championship, Prema have a chance to clinch the title for the first time since Giovinazzi and Gasly in 2016 after becoming embroiled in a heated dogfight with Uni-Virtuosi all year and currently hold a 47.5 point advantage at the top of the standings.

A victory in the teams Championship would mean a big confidence boost for the whole team ahead of 2021 and vindication of all their hard work this season.

With this in mind the Sakhir round of the F2 Championship should be unmissable.

We will find out soon enough. Stick with us here at insideF2.com to keep up to date with all the news and action.

Here are all the times you need to know this weekend. All times are local. GMT +3 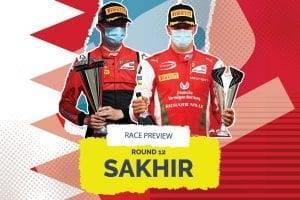