Round 3 of the 2021 FIA Formula 2 Championship will be held in Azerbaijan on the streets of Baku.

Last time out at Monaco, championship leader Guanyu Zhou had a mixed weekend which started brilliantly with a win in the Feature Race, Zhou only collected a combined 10 points from Monacos final two races.

Despite this Zhou extended his championship lead to 16 points after Liam Lawson and Dan Ticktum suffered mixed results at Monaco. Lawson showed great pace on track winning the second Sprint Race, the Kiwi suffered a heartbreaking disqualification due to a technical non-conformity.

Monaco also saw Théo Pourchaire romp to victory in the Feature Race showing maturity well beyond his years. The Frenchman outclassed his nearest challengers Oscar Piastri and Felipe Drugovich to win by 2.894 seconds.

Pourchaire claimed 25 points and an added bonus was that he became the youngest ever winner in Formula 2 at 17 years and 275 days old, to snatch that record away from F2 graduate Lando Norris.

Pourchaire found himself just 21 points off the championship lead after Monaco, the ART driver will be hoping to build on his Feature Race triumph this weekend at the Baku City Circuit.

The Baku City Circuit has been a feature on the F2 calendar since 2016 and has produced some magnificent action in the windy city including Antonio Giovinazzis’s double victory in 2016.

The most recent F2 event in Azerbaijan occurred in 2019, which saw Jack Aitken storm to a terrific Feature Race win.

Aitken will be looking to have yet another solid weekend in Baku after the British driver stepped in before Monaco replacing Matteo Nannini at HWA Racelab.

PREMA driver Robert Shwartzman struggled slightly in Monaco claiming just 12 points from his weekend and will be looking for a positive result this weekend to ignite his championship challenge.

Baku is incredibly challenging due to its long straights and twisty middle sector. The track is 6km long making it the second longest circuit on this year’s Formula 2 calendar. Baku sits just behind the all new Jeddah Street Circuit in Saudi Arabia which F2 will be visiting in early December.

The Baku City Circuit is home to 20 Turns with the main overtaking opportunity coming at Turn 1 due to the extremely long pit straight and DRS zone making passing almost irresistible at the first Turn.

Slipstream could play a huge factor this weekend both in qualifying and the races due to the pit straight being so long. The straight is 2.22km in length and has seen some great racing in the past including the breathtaking battle between Norris, George Russell, and Nicholas Latifi in 2018.

The trio of drivers were side by side as they approached Turn 1, harking back to Mika Häkkinen’s iconic pass on Michael Schumacher at the 2000 Belgian Grand Prix.

Turn 3 also presents a reasonable passing chance with DRS while the infamous Turn 8 has really made a name for itself over the past 5 years. In the closing stages of the 2017 Feature Race Sean Gelael struck the barrier. This incident blocked the track and brought out the red flags.

Turn 8 is incredibly narrow at just 8 metres wide with the beautiful 12th century Baku Fortress Wall on the outside. This notorious uphill section of track could be a hot spot of action this weekend.

Round 3 could be absolutely pivotal for the F2 championship with 65 points on offer this weekend in Azerbaijan.

Will Zhou extend his championship lead this weekend or will the chasing pack light the touch paper on their title charge? 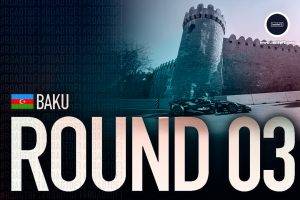