The Formula 2 whirlwind continues with Round 3 in Hungary this weekend!

Anticipating the races this year has been a little like waiting for a bus… You wait ages for one – and then three come at once!

We’ve already been blown away by two incredible rounds in the Austrian mountains.

The Hungaroring is situated just 23km from the architecturally stunning city of Budapest.

On the banks of the mighty River Danube, the ‘Heart of Europe’ is a travellers delight.

There isn’t a hotel in town without an amazing view. Whether it be of the awesome Hungarian Parliament Building. Or the Liberty Statue perched high upon Gellért Hill.

Normally a hot and sunny destination on the Formula 2 calendar, this weekend at the Hungaroring looks like it may hold some surprises for the teams.

It’s renowned for being a dry, dusty track, where track times become faster as cars put down more rubber.

Qualifying sessions can see late runs as drivers maximise the improving conditions. A wet and stormy track, however, will no doubt make for a different strategy.

Like the changeable weather of the Red Bull Ring, this upcoming weekend is expected to be cloudy with a possibility of rain.

It may very well come into play this weekend – making for a memorable Formula 2 race.

Saturday’s predictions currently state scattered showers, and Sunday looks to continue the theme. Thunder storms are a possibility across all three days.

If last Friday’s wet session is anything to go by, this weekend looks set to see more of the same.

A wet and stormy weekend is a potential nightmare for teams and drivers but a spectacle for race fans world over.

Nicknamed ‘Monaco without the buildings’ because of the bumpy and twisty character of the circuit, it can be difficult to overtake here.

Both drivers have already done well in the first two rounds of the Formula 2 2020 season.

With a win from Lundgaard, plus a second and third place for Armstrong, this weekend could see them both in the running again.

With Latifi having graduated to Williams F1, Schumacher’s 2020 luck may be about to change.

Charouz’s, Pedro Piquet, has a special reason to do well this weekend.

At the first ever Formula 1 Grand Prix here in 1986, his father, Nelson, drove an exemplary lap in his Williams, overtaking Ayrton Senna’s Lotus, for the first historical win at the circuit.

Being a rookie to Formula 2 this season, Pedro could demonstrate his natural talent if he can follow in his father’s footsteps.

Callum Ilott won the first Feature Race of the 2020 season with Felipe Drugovich taking the spoils in the Sprint Race.

Round 2 saw Lundgaard win Sunday’s Sprint Race, while Shwartzman took the Feature Race win the day before – The Russian leads the Formula 2 championship by a narrow margin.

Could this weekend add another contender to the battle? Or are we seeing the championship winner emerging already?

No doubt the last race in a triple-header, after months of being out of the cars and away from race-tracks, may ask questions of some of the drivers, and their ability to adapt to such unconventional circumstances.

However, 2020 is a unique season that’s seeing young Formula 2 drivers race across Europe in hire cars to get to a different destination.

It’s already writing itself as an adventure into the unknown.

For a sport that’s usually regimented and disciplined the unchartered territory being explored in this unparalleled season is a consummate pleasure to witness.

At 4.381km in length Saturday’s Feature Race will consist of 37 laps and Sunday’s Sprint Race will run for 28 laps.

We will be bringing you LIVE Lap by Lap action direct from our website insidef2.com – This weekend and every weekend after. Join us!

Here are all the times you need to know this weekend. All times are local (GMT +2) 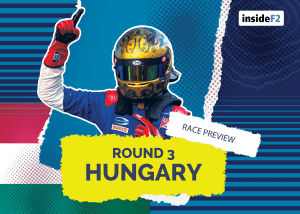