The fifth race of the Formula 2 season in Great Britain is upon us at the magnificent Silverstone circuit!

The world famous race track celebrates its 70th Anniversary on Sunday having hosted its first Grand Prix in 1950.

The second of the back-to-back British Grands Prix will be held as the commemorative race of this special celebration.

Formula 2 hasn’t been in operation for as long of course. However, the feeder series will add its own history to the books this coming weekend.

On paper the 2020 Formula 2 season looked to be as mismatched as a patchwork quilt.

However, each individual Feature Race and Sprint Race to date has offered a diverse and varied experience for the purist of fans.

Last Saturday’s Feature Race winner Nikita Mazepin will be hoping for more of the same this weekend. The Hitech driver delivered a solid performance to take his first win in Formula 2.

Ticktum remains positive despite his up and down season. The highlight of course being last week’s Sprint Race, where he dominated every lap from the start.

Finishing Saturday’s Feature Race in eighth position put him in the best position for the win the following day.

He took advantage from the moment the red lights went out.

On the final laps Lundgaard was closing fast. However the ART driver couldn’t catch the charging Brit who did just about enough to secure the win.

All eyes have been on Ticktum since the announcement last year that he would be joining the DAMS team this season.

He has shown maturity and a level head in every race thus far, and deserves the points he’s earned.

I didn’t include Ticktum in my Formula 2 Championship prediction, that you can view here.

I’m currently wishing I did because I can see the emerging British driver being the most consistent and confident this season. He’s a dark horse for sure.

Championship leader Robert Shwartzman will be hoping for a better few days than last weekend at Silverstone. He’ll want to extend his current eight point lead over second place Callum Ilott if he’s to continue his impressive form.

Ilott wasn’t able to maximise his championship point’s advantage last weekend because he stalled the car on the grid before the Feature Race began. The UNI-Virtuosi driver had to make a pit lane start.

The fifth place finish he spent all race clawing back saw his hard work slip through his hands as he spun and retired from Sunday’s Sprint Race.

Being a home race on British soil, expectations were high for the Ferrari Academy driver. And the pressure continues this weekend.

Will the hot and humid British weather and tyres have an influence over this weekend’s Feature Race and Sprint Race in Great Britain?

Shwartzman is the only driver to secure two race wins this season. Will there be a different name on the top step this weekend? Or will the Championship winner emerge and begin to edge ahead of the pack?

We here at insideF2 will keep you up-to-date on all the action!

This weekend we will be bringing you LIVE Lap by Lap action direct from our website insidef2.com – Join us!

Here are all the times you need to know this weekend. All times are local (GMT +1) 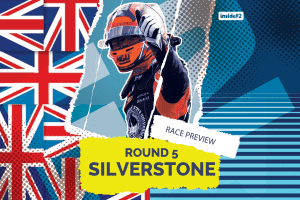