The infamous Monza will host Round five of the 2021 F2 Championship.

The Temple of Speed will also welcome plenty of fans with half the usual number of spectators allowed at the Italian circuit this weekend.

Oscar Piastri currently leads the championship amassing 108 points throughout the first four rounds of the season.

Piastri has performed very consistently in 2021, the Australian has scored points in all but two of the 12 races so far this campaign.

The previous round in Great Britain yielded more vital points in all three races for Piastri.

The PREMA driver scored a brilliant podium in the Feature Race after a determined defense of third place from MP Motorsport’s Richard Verschoor in the closing stages.

The Championship fight took yet another twist at Silverstone.

Piastri snatched the championship lead from Zhou at the British round of the campaign.

The Alpine Academy driver is striving for his third consecutive driver’s championship after triumphs in F3 and Formula Renault Eurocup over the past couple of years.

The UNI-Virtuosi driver failed to score during the Sprint Races but recovered to win the Feature Race taking the maximum compliment of 25 points.

Zhou has suffered some sub-par results in recent times which has held back his championship challenge this campaign. The 22-year-old has been affected by four consecutive pointless races before his commanding win at Silverstone.

The Chinese driver will be hoping for a clean weekend in Italy to regain the championship lead.

FIA Formula 2 accommodates two Italian teams. PREMA and Trident will be making every effort to have a successful weekend at Monza to appease the home crowd.

PREMA, who are currently leading the Constructors Championship has had previous success at Monza.

The Italian squad claimed a victory and third place 12 months ago at Monza courtesy of eventual champion Mick Schumacher.

PREMA driver Robert Shwartzman has had previous success at Monza in F3. The Russian took victory in the Feature Race as he stepped closer to his 2019 Formula 3 crown.

The Monza circuit is made up of 11 turns and is the fastest on the Formula 2 calendar.

Monza holds the highest average speed of all eight rounds on the F2 calendar. The historic circuit is closely followed by the all new Jeddah Street Circuit in Saudi Arabia and the ultra fast Silverstone.

Monza’s best overtaking opportunity could be at the Variante Del Rettifilo chicane this weekend.

Rettifilo comprises Turns 1 and 2 on the 3.6 mile circuit. The chicane is a prime spot for overtaking due to the long main straight which is accompanied by a DRS zone.

Monza is also home to a plethora of iconic turns including Ascari and Curva Alboreto famously known as Parabolica.

Ascari is a crucial turn on the circuit that was built all the way back in 1922.

The fast chicane is a brilliant, flowing ribbon of tarmac that is preceded by the second DRS zone of the high speed lap.

Monza will also feature a couple of driver changes.

HWA Racelab will welcome back 27 year old Jake Hughes who will be replacing the injured Jack Aitken for the Italian Grand Prix weekend.

German driver David Beckmann has left Charouz Racing System and will be replaced by Enzo Fittipaldi who is being promoted from Charouz’s F3 team.

Beckmann has performed admirably in Formula 2, driving to a couple of podiums in Bahrain and Great Britain.

Fittipaldi will be looking to impress in F2 right under the nose of Formula 1.

Will Piastri extend his championship lead in Italy or will Zhou strike back at the top of the championship? 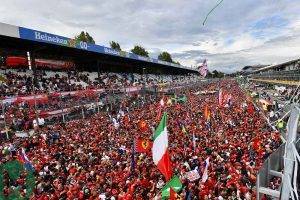