The Sochi Autdrom in Russia will host the sixth round of the Formula 2 championship.

The championship has been absolutely thrilling so far, PREMA’s Oscar Piastri leads the championship by 15 points over fellow Alpine Academy driver Guanyu Zhou.

Piastri enjoyed a magnificent weekend in Monza last time out storming to pole position at the Temple of Speed. The Australian also claimed the invaluable four points that went with his heroic effort.

Piastri has shown brilliant consistency so far in 2021 having scored points in 13 of the 15 races this season. The 20 year old finally secured his first Feature race in Italy coming out on top ahead of title rival Zhou and Carlin driver Dan Ticktum.

Monza was also a much more stable weekend for Zhou scoring a duo of second places and P8 in Race 2 after a mixed Silverstone.

The Frenchman won on the streets of Monaco earlier this season in what has been a very impressive rookie season in Formula 2.

PREMA driver Robert Shwartzman will be hoping for an impressive resulting front of his home crowd. Shwartzman scored a terrific podium in Italy and will need to out score Piastri and Zhou to have any chance of mounting a late title charge.

Shwartzman has enjoyed good results at Sochi in the past winning the 2019 FIA F3 championship. However, the 21 year old struggled 12 months ago in Russia scoring just one point in his first F2 campaign.

The Sochi Autodrom should provide more of the same thrilling action on a circuit that is one of the newer venues on the F2 calendar.

It is surrounded by venues from the 2014 winter Olympics such as the Fisht Olympic Stadium and the Bolshoy Ice Dome which gives the brilliant facility in Sochi a sense of real character.

Sochi has produced some great racing in F2 since the inaugural event in 2014. Jolyon Palmer won the Feature Race for DAMS on his way to the GP2 crown.

More recently Nyck De Vries clinched the F2 championship in 2019 by winning the Feature Race and scoring a podium in Race 2.

The track itself is 5.848km long and home to the iconic Turn 3. A high speed left hander that pushes the cars and their drivers to their limits.

The best overtaking opportunity could come at Turn 2 after the incredibly long pit straight which accommodates one of Sochi’s two DRS zones.

Sochi’s final sector is extremely technical with a series of slow speed turns.

The chicane at Turns 14 and 15 could provide a challenge for the drivers this weekend due to it’s off camber nature.

Zhou will be wanting to recreate his good form from last years event in Sochi. He picked up his maiden F2 victory in Russia last year for the UNI-Virtuosi team.

The Chinese driver scored points in both races and won the Sprint Race. A race that was cut short after eight laps due to a crash between Luca Ghiotto and Jack Aitken.

With 65 points to play for in Russia Round 6 of the season will be crucial for the championship.

Will Piastri continue extend his championship lead or will Zhou begin to reel in the Australian at the top of the drivers standings. 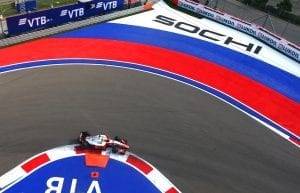