The Circuit de Spa-Francorchamps in Belgium will host Round 7 of the 2020 Formula 2 Championship.

Spa is an epic racing circuit that every racing driver would arguably like to drive on at some point in their life. And every race fan would like to visit.

However, it cannot go unacknowledged that this is the location where shining star, Anthoine Hubert, tragically lost his life in a racing accident last year.

No doubt for the entire paddock the race will be honourably subdued this coming weekend.

Hubert’s potential was quickly established after a lightening start to his rookie Formula 2 season. Driving for the BWT Arden team the French driver took his maiden Sprint Race victory at Monaco.

Just one race later, Round 5 at the Paul Ricard circuit, Hubert threw down his Championship gauntlet, by winning Sunday’s Sprint Race on home turf.

Behind him was DAMS driver Sérgio Sette Câmara and Campos’s, Jack Aitken, who qualified third on the grid for Saturday’s Feature Race.

With the race underway, Lap 2 saw a series of events that led to the catastrophic accident, that involved the mid-field pack of Giuliano Alesi, Ralph Boshung, Hubert, and Juan Manuel Correa.

Correa himself was seriously injured and is still receiving physical rehabilitation a year later.

This weekend in Belgium will be the first time the drivers race on the same tarmac where they lost their peer and friend.

Championship rivalry aside, all drivers respect the person next to them and most can say they are bonded by more than a fast car and a desire to win.

No doubt there will be emotional tributes for Hubert. But the biggest mark of respect will be the example the Formula 2 Championship contenders set during this poignant weekend.

Despite the youthful age of the field, the feeder series drivers have been racing for over half of their lives. They are primed for the elite ranks of Formula 1.

They’re professionals and racing for a Championship title. The spoils are there for the taking.

The track in Belgium is one of the most challenging in Formula 2 history. At 7km and with 19 turns it is the longest circuit on the racing calendar.

Staying out of trouble on Turn 1 (La Source) will be their first test.

The quick turns and downhill combination of Eau Rouge and Raidillon (Turns 3/4/5) that immediately sees the track climb steeply uphill to a blind crest is taken flatout to maximise overtaking opportunities on the Kemmel Straight and Les Combes combination (Turns 7/8/9).

This opening sequence of the race is what makes the circuit an exciting calendar favourite for spectators as well as for drivers.

The weather can have a significant influence on the outcome of every session because the area has its own micro-climate.

Most famous for this influence was the 1998 Formula 1 Grand Prix that saw a 14 car pile-up on Lap 1, triggered by then McLaren driver, David Coulthard.

It’s been predicted that light rain will make an appearance this coming weekend. Thrilling for the home-based audience. A potential game changer for the Formula 2 Championship.

There’s still a closable gap to third placed Christian Lundgaard who is on 87 points.

The top three are closely followed by a tightly packed top 10. From Yuki Tsunoda on 82 points, down to DAMS’ Dan Ticktum in 10th place, hanging on with 63 points.

All are still within a realistic shot of this year’s Championship title now the finalised 12 race calendar has been confirmed.

Red Bull junior, Jüri Vips, will be making his Formula 2 debut, replacing the injured Sean Gelael at DAMS. The challenging track will be a test on the young Estonian’s abilities.

Who do you think will be top three in the Feature and the Sprint Race?

Dare you be bold enough to declare your 2020 Formula 2 Champion?

Related to this Author

F1 miles for both Armstrong and Shwartzman

Carlin Top Championship After Round One 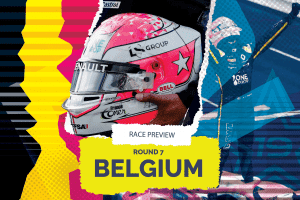