The Formula 2 championship heads to the Autodromo Nazionale di Monza. The charismatic 3.6-mile track only an hours drive away from Milan, is where the World’s greatest drivers have been battling since 1922 for on-track supremacy at what is known as the temple of speed.

Monza has been the venue where heroes wearing red have been given god-like receptions and villains have been cast with a sprinkling of the impassioned and extremely knowledgeable Tifosi making this particular Grand Prix weekend even more special.

The second tier of motorsport has been racing on this very track since 2001 when the series was still called F3000 and has seen drivers such as Lewis Hamilton, Giorgio Pantano, and Nico Hülkenberg crowned GP2 champion at this very venue.

This year’s race will not see a champion crowned nor will it see those typically passionate fans, the race is set to be the last behind closed doors as we head to Mugello in Round 9. We look forward to the weekend’s action as it could prove a crucial phase of the championship with only four rounds to go.

Going into Monza, The Formula 2 Championship leader Robert Shwartzman holds a ten-point lead over fellow Ferrari junior Callum Ilott after the Russian scored his third race win of the season in the Spa Sprint Race. Ilott’s Feature Race finish in tenth place and Sprint Race DNF saw the Brit endure a frustrating weekend from which he will be looking to bounce back from.

Both Ferrari juniors haven’t pulled clear at the top just yet. Tsunoda and Mick Schumacher closed the gap to Shwartzman and IIott, with the Japanese driver picking up a feature race win after a hard battle with Nikita Mazepin. The Honda junior inherited the Feature Race win after race control gave Mazepin a five-second penalty not long after the pair crossed the line.

Schumacher meanwhile kept out of trouble and finished third in the Feature Race and second place in the Sprint Race which brought the German within twenty-six points of his teammate Shwartzman.

The driver’s standings also have Nikita Mazepin in fifth, just behind this leading group with Guanyu Zhou in sixth.

Monza’s mixture of long straights and fast corners such as the Ascari and the Parbolicua have made it a car beater with the Mecachrome engine and the 18-inch tyres set to be under intense pressure this weekend as ambient temperatures set to reach the late twenties for qualifying and both races.

Last year In the Feature Race, Nobuharu Matsushita took his second win of the season for Carlin, however, the drivers that stole the headlines were Luca Ghiotto and Nyck De Vries who came through the field to finish second and third.

Luca Ghiotto spoke to insideF2 exclusively about Monza and its challenges. He commented how the track is a tale of the DRS zones;

“It’s tough, It doesn’t have many corners and it has lots of long straights. So it’s really not easy to pull a gap to the other drivers for sure.”

“If you do everything perfect you get a lot from it. You just need to drive well at every spot on the circuit and try to avoid mistakes, if you do a mistake you will basically be overtaken by one, two or even three cars.”

We saw such battles last year in the Sprint Race as Jack Aitken took his third race win of the season just in front of countryman Jordan King and championship leader De Vries.

This weekend’s racing could see the championship become a four-horse race, this leading pack could stretch the gap they have on the rest of the field. However, as we have seen in 2020 thus far, anything could happen in the world of Formula 2 and it usually does! 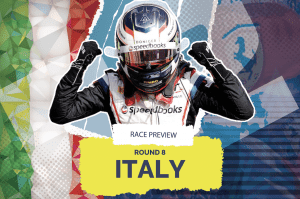